Losses by Ohio Stateand Penn Statedropped both squads from Nos. 6 and 7, respectively, to Nos. 13 and 14. The Buckeyes were dominated in a 55-24 loss to Iowa. The Nittany Lions survived a nearly 3-hour weather delay, but couldn't handle Michigan State, falling 27-24 in East Lansing, Michigan.

The losses by Ohio State and Penn State have put the Big Ten in a tough spot if it wants to get a team into the CFP. Unbeaten Wisconsinis the highest-ranked team from the conference at No. 8 this week, but despite the belief of athletic director Barry Alvarez, being unbeaten this year may not be enough to guarantee a spot in the playoff.

Benefiting from the losses of Big Ten heavyweights was TCU, which moved from No. 8 to No. 6 this week. The Horned Frogs have a chance to make a move this week as they take on No. 5 Oklahoma in a battle between the Big 12's top teams.

Miamialso made a move up the chart, going from No. 10 to No. 7, jumping over Wisconsin in the process. The Hurricanes moved up after beatingVirginia Techon Saturday, a win that CFP committee chair Kirby Hocutt said helped push Miami past the Badgers in the committee's eyes.

Saturday's showdown between the Hurricanes (8-0) and Irish (8-1) could be something of a CFP eliminator as the loser likely will see its chances of making it to the playoff disappear.

Washingtonis the Pac-12's first entry in this week's rankings, coming in at No. 9, two spots ahead of conference rival USC. In between the two West Coast schools is Auburn, at No. 10. The Tigers could turn the CFP upside down if they can pull off a stunner at home and knock off Georgia on Saturday.

Michigan State, fresh off its win over Penn State, made a massive jump up the rankings, going from No. 24 last week to No. 12 this week. Just as it is in the Big Ten East standings, Sparty is followed by the Buckeyes and Nittany Lions.

At No. 15 is Oklahoma State, which fell four spots after losing its rivalry game to Oklahoma 62-52 in a classic Bedlam battle.

Mississippi Statefollows at No. 16 this week, one spot ahead of Virginia Tech. The Hokies had been No. 13 last week, but tumbled to No. 17 after losing at Miami on Saturday.

UCFremains the highest-ranked school from the Group of 5 schools, holding steady at No. 18.

Washington State, led by the Pac-12's all-time leading passer in quarterback Luke Falk, sits at No. 19 and is followed by Iowa and Iowa State.The in-state rivals are heading in opposite directions, with the Hawkeyes making their first appearance in the CFP this season, while the Cyclones fell from No. 15 to No. 21 after a loss at West Virginia. 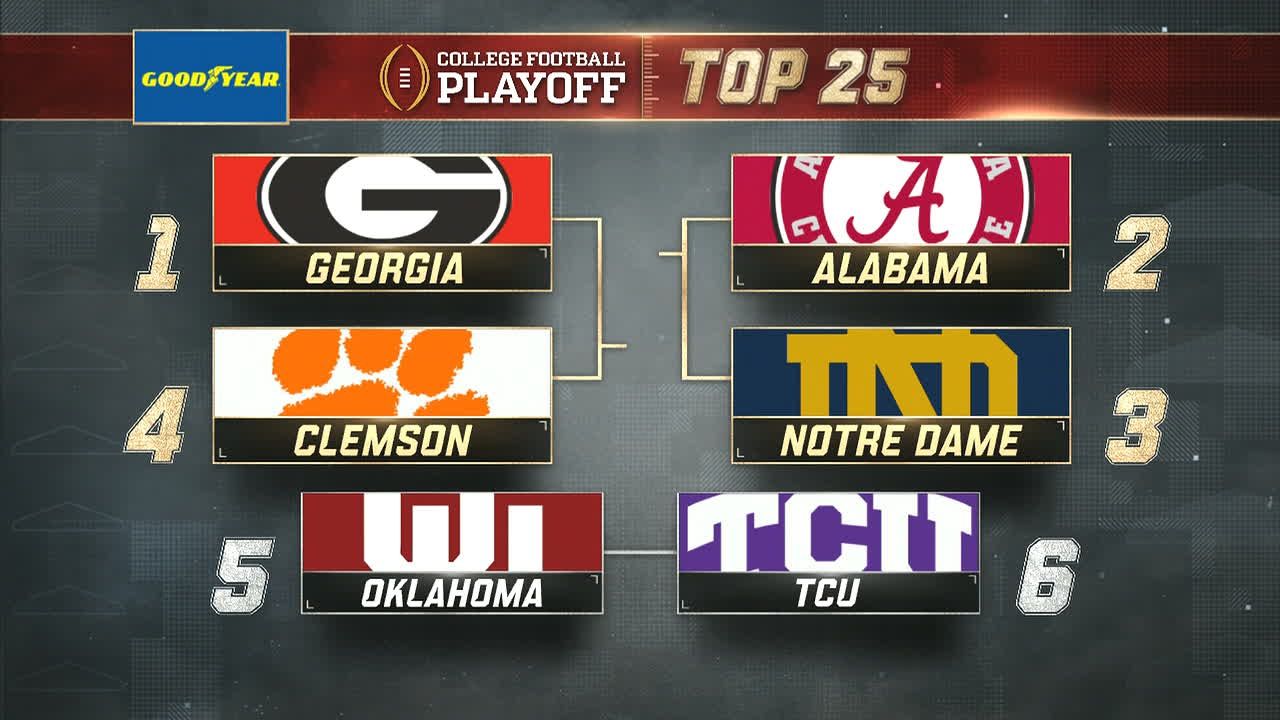 COVID-19 LATEST: Free testing in Raleigh
3 US cities could be next COVID-19 hotspots, researchers warn
Why the 2020 flu vaccine is more important than ever
Is it safe to visit the dentist during COVID-19?
Explained: What's keeping Washington from a stimulus deal
Show More
LIVE: Attorney gives update on Breonna Taylor case
Money's on the way from 2017 free cruise robocall lawsuit
Restaurant workers walk out over lack of COVID-19 protections
NC student vaccination deadline extended through Nov. 1
Early symptoms could indicate severity of COVID-19
More TOP STORIES News