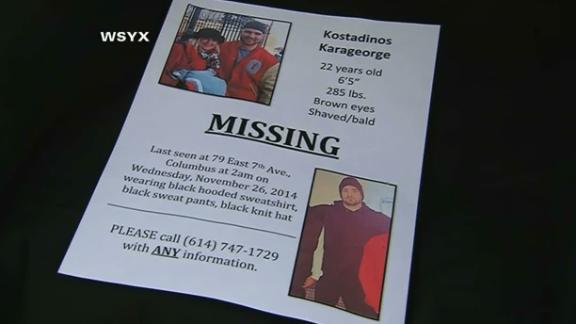 Police in Columbus, Ohio, and the family of Ohio State's Kosta Karageorge say the senior defensive lineman has gone missing and hasn't been seen since early Wednesday morning.

According to multiple reports,Karageorge went for a walk in Columbus at about 2 a.m. Wednesday, when his roommates last saw him.

"He had some extenuating circumstances that night that lead us to believe he was upset," his sister Sophia said, according to The Columbus Dispatch.

Karageorge's mother has filed a missing person's report with the police, who have confirmed they are actively looking for the walk-on.

Karageorge's mother also says his friends have scoured the Ohio State campus looking for him to no avail.

"Our thoughts continue to be with the family of Kosta Karageorge and we pray that he is safe and that he is found soon," Buckeyes coach Urban Meyer said in a statement Friday afternoon.

"He is a young man who joined the football team in August and was a hard worker on the field and pleasant off the field. He has been an important player in practice for us, right up until the time he was reported missing. If anyone knows anything about his whereabouts, please help his family and contact the authorities."

Karageorge left without his wallet or his motorcycle, his sister said. He has a history of sports-related concussions, including one a month ago, and his family worried he might have become disoriented, she said.

"We're very concerned that he's not himself and that he maybe doesn't know what's going on," she told the newspaper.

She said that he has followed trainers' instructions and received proper care after each concussion but that "his repercussions from [concussions] have been long-term or delayed."

Ohio State team physician Jim Borchers issued a statement Friday afternoon saying "while we are not able to discuss or comment about the medical care regarding our student-athletes, we are confident in our medical procedures and policies to return athletes to participation following injury or illness."

Karageorge, who has played in one game this season, also has competed for the Buckeyes' wrestling team for three seasons. On his Twitter profile, he is said to love his country, his school and his truck.

"Proud to be a wrestler for the ohiostate university," the profile says.

Karageorge is one of 24 Ohio State seniors set to be honored ahead of Saturday's home game against rival Michigan.