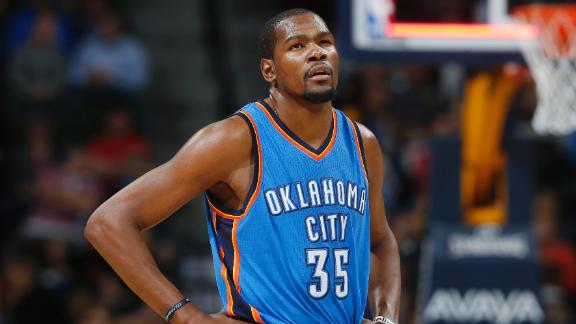 SALT LAKE CITY -- A day after Kevin Durant was ruled out for the rest of the regular season because of issues with his surgically repaired right foot, the Oklahoma City Thunder said they are focusing on continuing their playoff push.

"It was a tough day," Thunder coach Scott Brooks said. "Kevin, out for the season, all of our thoughts are with him. It's not about us, it's about him. Him getting better and recovering and coming back stronger and better next season."

Durant will undergo a bone graft early next week on his right foot, which has already had two operations on it to repair a Jones fracture discovered in October. He will be able to return to basketball activities in four to six months, leaving the Thunder with the reality they will play out this season without the reigning MVP.

"Obviously it's not the news we wanted to hear about KD, but we've got to be able to put it together and get things done and find a way to stay in the playoffs," star guard Russell Westbrook said. "Obviously it's something as a team we don't come into the season saying, 'That's what's going to happen,' but things happen, injuries happen. It's a part of the game."

Westbrook dealt with a similar ordeal last season, going through three different knee surgeries that resulted in him missing 36 games. He said he hasn't had the chance to talk with Durant about the situation yet, but will soon to try to encourage him.

"I definitely will when I get a chance to get back and see where his mind is," Westbrook said. "He knows everything is going to be all right. It's just a process that he has to go through right now."

The Thunder (41-31) entered Saturday three games ahead of the New Orleans Pelicans and 3 games up on the Phoenix Suns in the chase for the eighth seed in the Western Conference.

"Obviously it's tough losing one of the best players in the league. He does so much for us on both ends of the floor. He's obviously a clutch player late in games," Brooks said. "We've made adjustments all year and we have to continue to make adjustments knowing that he's not coming back. We want what's best for KD, and we're going to get that. But our guys are still focused on these last 10 games. We're in a playoff race and every game is critical for that race to end the way we want it to end."

The Thunder have dealt with injuries throughout the entire 2014-15 campaign, playing almost all of November without either Durant or Westbrook, who suffered a broken hand the second game of the season. It resulted in a 3-12 start, but they've been able to rebound, becoming only one of four teams in NBA history to go from nine games under .500 to nine games over.

"Even from the start when we were losing a lot of those games, every game was close and those are games we're not happy we lost in the last minutes, but we were competitive and we've had the approach that we still have enough," Brooks said.

Currently sidelined alongside Durant is shooting guard Andre Roberson (sprained ankle), forward Nick Collison (sprained ankle) and forward Serge Ibaka (knee surgery). Every player who was on the roster in training camp has missed time this season due to injury, but clearly the most significant is Durant, who played in only 27 games this season.

"We're not as good of a team [without Durant], but we're still a good team," Brooks said. "When you lose KD, Serge, Andre, Nick, you're not a better team overnight, but you still have to work on ways you can put yourself in position to win and our guys have done a good job of that."

Losing Durant, though, without the chance to get him back, essentially is the final dagger for an adversity-filled season for the Thunder. A preseason title favorite, they're now playing an unfamiliar role of underdogs, especially if they match up with the Golden State Warriors in the opening round.

"It's definitely not a role we've been in, but it's a role that we're going to embrace the last three weeks of the season," Brooks said. "We've have a tough year with injuries, but we're still having a year that we can be proud of."

Durant Needs Surgery, Out 4-6 Months
Marc Stein reacts to the news that Thunder forward Kevin Durant will have bone graft surgery on his right foot and is expected to return to basketball activities in four to six months.

Durant Injury A Huge Blow To Thunder
Chauncey Billups and Richard Hamilton react to the news that Thunder forward Kevin Durant will undergo bone graft surgery and is expected to miss four to six months.