On a day filled with upsets, Michigan State continues to surge 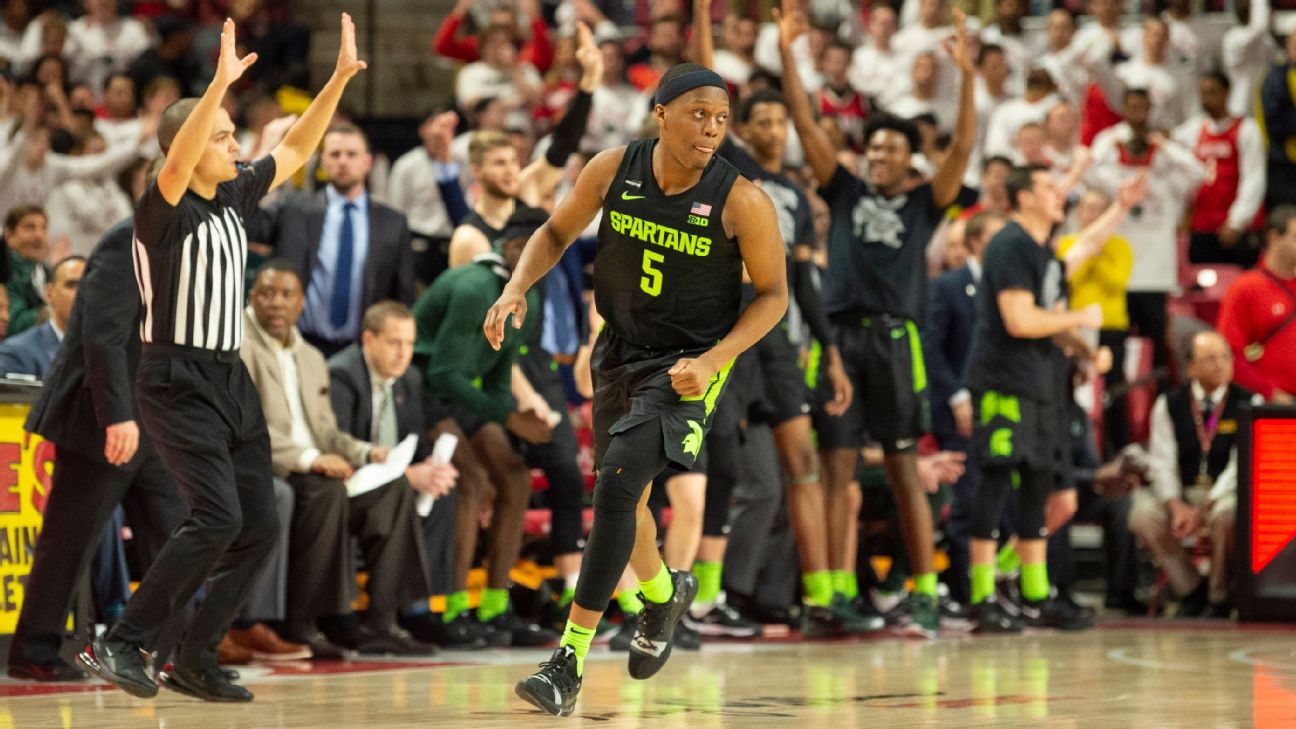 The penultimate Saturday of the regular season for college basketball's power conferences -- and the final weekend for a number of smaller leagues that start their conference tournaments in the next few days -- brought back some of the insanity from the first two months of the season. Heading into the late games Saturday, nine teams in the AP Top 25 had already suffered losses, including four top-10 teams.

Baylor lost for the second time in three games after winning 24 of its first 25, while Duke suffered its second loss in a row and Florida State fell at Clemson on a layup with 1 second left. San Diego State avoided joining that group, coming back to beat Nevada behind Malachi Flynn's career-high 36 points.

Two teams continuing to surge are Providence and Texas. The Friars went to Villanova and won their fourth game in a row, likely sealing an NCAA tournament bid with yet another key win. The Longhorns, meanwhile, is doing their best to get a berth and save Shaka Smart's job, beating Texas Tech on Saturday in Lubbock. One team going the opposite direction is West Virginia, which has now lost six of seven after falling at home to Oklahoma.

Two notes: One, Kansas will stay at No. 1 after escaping at Kansas State -- but Udoka Azubuike played only 20 minutes after injuring his ankle on a couple of occasions. And two, Evansville completed an 0-18 Missouri Valley Conference campaign; and according to Stats LLC, the Purple Aces became the first team in NCAA history to both beat a No. 1 team (Kentucky) and lose all its conference games in the same season.

On to the big storylines from a very busy day:

For most of this season, it looked like it just wasn't going to happen for Michigan State, the nation's preseason No. 1 team. An opening loss to Kentucky, a loss to Virginia Tech, inconsistency during Big Ten play -- things just weren't coming together. And maybe the Spartans still won't ever live up to their preseason billing ... but Michigan State is starting to gather momentum at the right time. The Spartans went to Maryland on Saturday night, and instead of it turning into a coronation for the Terrapins' Big Ten regular-season title, Michigan State scored the first nine points of the game en route to a 78-66 victory in College Park.

Cassius Winston will get most of the plaudits after his 20-point, six-assist effort, but it was Winston's supporting cast that really opened some eyes. Malik Hall had his best game of the season since a November win at Seton Hall, finishing with 16 points and six boards before fouling out. Rocket Watts hit a couple huge shots in the second half when the Terrapins were making a run, but it was his defense on Anthony Cowan that made the biggest impact. Winston and Xavier Tillman are going to be the constants for coach Tom Izzo, but if he can get consistency from Hall or Watts or Aaron Henry, Michigan State's ceiling rises.

Michigan State's win also cuts Maryland's lead atop the Big Ten standings to one game with two left. The Terps have to go to Rutgers and host Michigan, while Michigan State plays at Penn State and hosts Ohio State.

Coaching and point guards win in March, and Michigan State has two of the best in Izzo and Winston. The Spartans bandwagon is going to pick up a few passengers after Saturday.

Much like Michigan State is rounding into form at the right time, John Calipari has Kentucky playing its best basketball of the season down the stretch. The Wildcats clinched the SEC regular-season title on Saturday with a win over Auburn, avenging their most recent loss -- to the Tigers on Feb. 1. Kentucky has since rattling off eight wins in a row and is pushing for a top-two seed in the NCAA tournament.

After a back-and-forth first 10-plus minutes, Kentucky went on a 20-3 run in the first half to take the lead and kept Auburn at an arm's length the rest of the way. Immanuel Quickley had 18 points and 12 rebounds, continuing to make his case for SEC Player of the Year. In his past 18 games, dating back to the victory over Louisville in late December, Quickley is averaging 19.1 points and 4.8 rebounds and shooting 46.5% from 3-point range. Tyrese Maxey's outside shot hasn't been falling, but he's making better decisions at the offensive end, hitting double figures in each of the past seven games.

Calipari has settled on his rotation, his lineup and his primary guys at the end of games. Quickley has bought into his go-to-guy role, Nick Richards has blossomed into one of the better post players in the SEC and Maxey gets buckets. The key is going to be Ashton Hagans, but if he can limit turnovers and hassle opposing guards at the point of attack, that might be enough for Kentucky. The Wildcats are clicking.

3. What's going on with Baylor and Duke?

As mentioned earlier, two of the more surprising results from Saturday came with Baylor and Duke both losing on the road, to TCU and Virginia, respectively. Baylor fell to one game back of Kansas in the Big 12 standings, and while the Bears are unlikely to lose their 1-seed (or even their status as No. 2 overall team in the field), a few issues are coming to the surface for Scott Drew's team. In the two losses the past two weekends, the Bears shot 11-for-37 from 3-point range. Freddie Gillespie had a great game against TCU on Saturday, finishing with 18 points and 17 rebounds -- but Baylor needs more from its elite guard group. The Bears have one of the best perimeter collections in the country, but the quartet of Jared Butler, MaCio Teague, Davion Mitchell and Devonte Bandoo haven't been at their best in the two losses. Baylor relies on its guards to make shots and can ill afford three or four of them to struggle on the same night.

As for Duke, the Blue Devils are now tied with Virginia for third in the ACC and are seeing their grasp on a potential regular-season title disappear in the span of a week with losses at Wake Forest and Virginia. Duke was woeful offensively against the Cavaliers on Saturday, and while that's not shocking for a team facing a Tony Bennett-coached defense, this was a historically bad effort for the Blue Devils. They scored less than 0.80 points per possession, their lowest output since 2009. Duke is struggling to shoot the ball from the perimeter and Vernon Carey fouled out of both games this week. Mike Krzyzewski's team can't survive without one of its few consistent scorers being on the floor.

Michigan and Ohio State have had somewhat similar seasons. Both teams got off to a great start, with the Wolverines winning the Battle 4 Atlantis en route to a 7-0 start and a No. 4 ranking and the Buckeyes winning 11 of their first 12 games and rising to as high as No. 2 in the AP poll. Michigan lost eight of its next 11 after the 7-0 start and Ohio State lost six of seven following the 11-1 start. Both teams have bounced back and are pushing for top-five seeds in March.

The key on Sunday for Michigan will be health. Isaiah Livers has played five of the past six games, but has missed time with a couple of different injuries. Meanwhile, Eli Brooks -- arguably the team's best defender this season -- missed Thursday's home loss to Wisconsin with a broken nose. At full strength, this team has enough to make a deep March run. Ohio State won the first meeting between the two teams by three, on Feb. 4.

There aren't many teams playing better basketball right now than Creighton, which has won five games in a row and nine of its past 10 to make a push toward a top-two seed on Selection Sunday. In fact, heading into the weekend, the Bluejays ranked No. 2 in adjusted efficiency in February at BartTorvik.com. Greg McDermott's team is playing offense at an outrageous rate, and it has made at least 13 3-pointers in three of its past five games and scored at least 1.1 points per possession in eight of its past 10.

Sunday, the Bluejays will head to St. John's to keep their Big East title hopes alive. They entered the weekend tied for second place with Villanova, one game behind Seton Hall -- and then the Wildcats lost, but Seton Hall beat Marquette on the road. Creighton needs to win to stay within striking distance.

It's going to be a massive day for the bubble. In the early afternoon, there's a Big East bubble battle, with Xavier looking to essentially punch its ticket to the NCAA tournament and Georgetown hoping to keep whatever at-large hopes it has remaining. Cincinnati also has a massive chance to boost its résumé with a trip to Houston, and Rhode Island will look to avoid a loss at home against Saint Louis. Indiana is in good position for a bid, but the Hoosiers can really lock things up with a victory at Illinois.

Later in the afternoon, Wichita State -- which has righted the ship since a three-game losing streak at the start of February -- is on the road to face SMU. Stanford is right on the cut line, and the Cardinal get a chance for a résumé-building win with Colorado coming to Palo Alto, California. To end the night, Minnesota is likely finished after dropping to 13-14 with a collapse against Maryland -- but the Golden Gophers can regain their pulse with a win at Wisconsin, which has won five in a row. 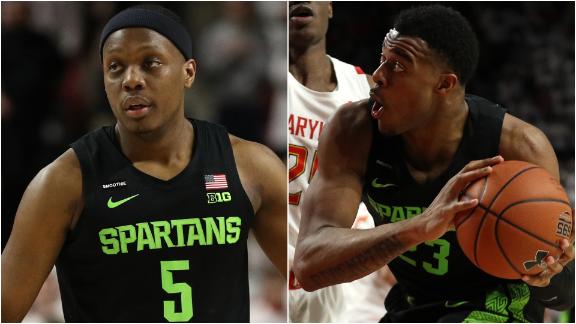 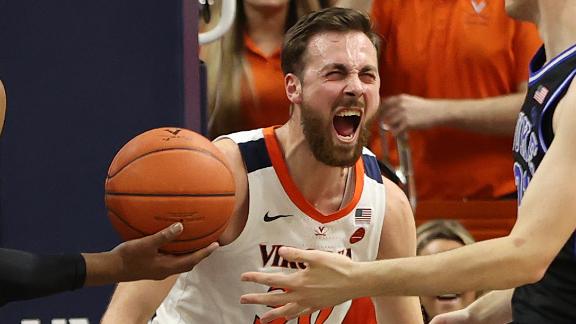