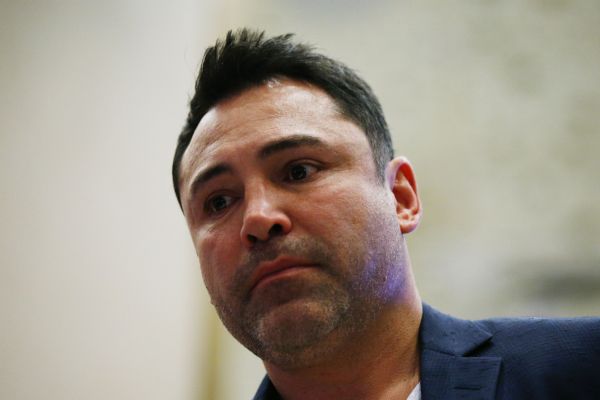 Oscar De La Hoya, the International Boxing Hall of Famer and CEO of Golden Boy Promotions, was arrested on suspicion of driving under the influence early Wednesday in Pasadena, California.

According to the California Highway Patrol, De La Hoya was arrested at 1:57 a.m.

An officer pulled over De La Hoya, who was driving a Land Rover, on Del Mar Boulevard, west of Arroyo Boulevard, according to an incident report obtained by ESPN. The investigating officer smelled an alcoholic odor in the car and administered "a series of field sobriety tests," to which De La Hoya agreed, according to the report.

De La Hoya failed the tests and was arrested, according to the report. He was cited and later released.

De La Hoya, 43, has a history of alcohol and drug problems. He has been to a rehabilitation center at least twice for his addictions, both times causing him to miss major Golden Boy Promotions fights.

In 2011, De La Hoya was absent from Bernard Hopkins' historic light heavyweight championship victory against Jean Pascal in Montreal because he went to rehab days before the bout. In 2013, he returned to rehab again just days before the junior middleweight championship unification fight between Floyd Mayweather and Canelo Alvarez, the biggest fight in Golden Boy's history.

In recent months, De La Hoya, who won a 1992 Olympic gold medal and 10 professional world titles in six weight divisions before his 2008 retirement, has been seen drinking publicly on a regular basis. Last month, he was seen drinking at a postfight party after Hopkins' retirement fight against Joe Smith Jr. at The Forum in Inglewood, California.

A Golden Boy Promotions spokesman declined to comment when reached by ESPN.

De La Hoya was scheduled to appear at a news conference in Los Angeles on Wednesday afternoon to promote Golden Boy's HBO-televised fight card on Saturday night, which is headlined by the junior lightweight fight between world titleholder Francisco Vargas and Miguel Berchelt, at the Fantasy Springs Resort Casino in Indio, California. De La Hoya, however, was a no-show.

Last week, Golden Boy finalized a two-year deal with an option for a third year with ESPN for a new live boxing series, "Golden Boy Boxing on ESPN," that is scheduled to debut March 23 from Fantasy Springs. The deal calls for at least 42 cards -- 18 this year and 24 more in 2018.