Our takeaways from the college football AP preseason Top 25: Staples, snubs and surprises 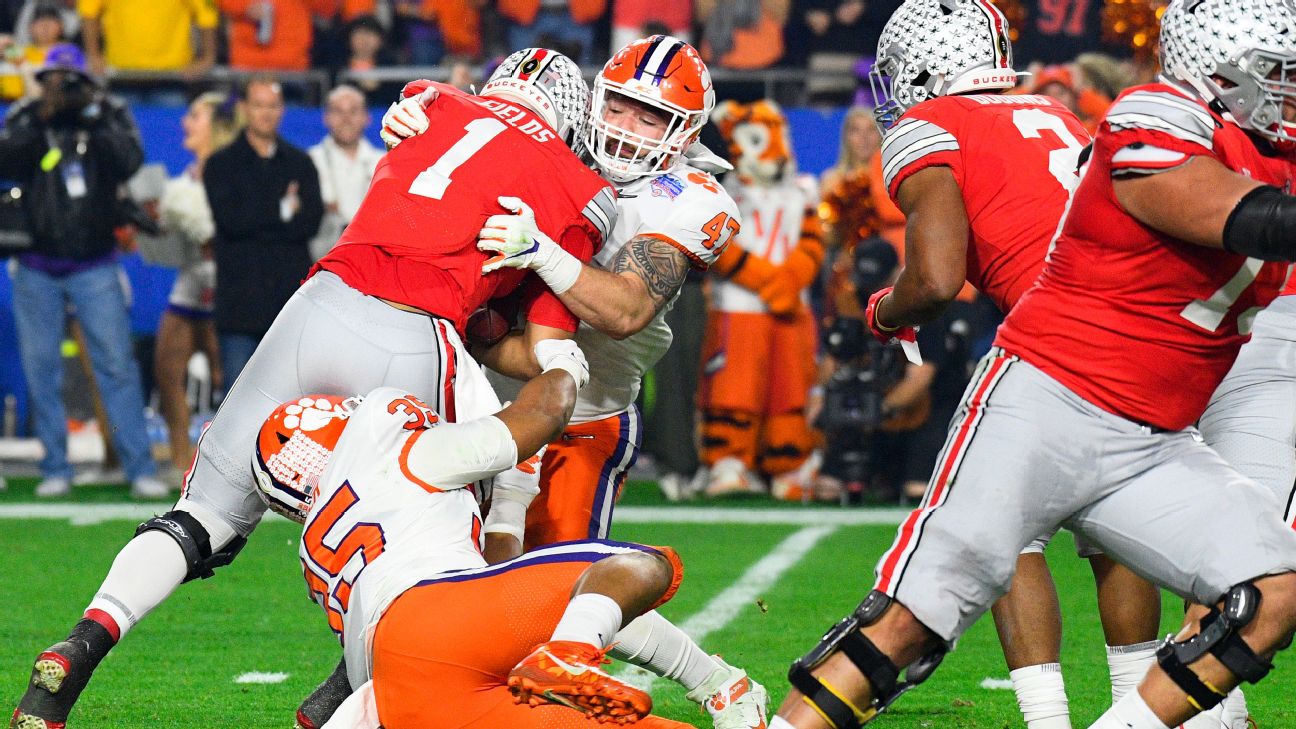 The preseasonAssociated Press Top 25 poll is out. And yes, it features teams from conferences that won't take the field this fall.

While that might detract from some of its credence, there are some notable takeaways.


Our pool of writers weigh in on what it all means:

Let's take it with a grain of salt

The best part about preseason polls every year is to see the wild overreactions about disrespect and the conspiracy theories about why one team is lower than another. Strong comedic value, annually. But there are still plenty of people who don't overreact and look at the poll for what it is: a fun reminder that the season is about to start and a general gauge at what expectations are nationally. That usually comes with the benefit of spring practice, offseason programs, etc. Not only does this poll come with even less information, it includes nine teams in the Top 25 that won't even play. A nice recipe for the spiciest of takes. -- Kyle Bonagura

It's hard to take too much from a preseason poll in any year, but particularly now, when two Power 5 leagues won't play and no one's had a typical offseason. So perhaps the biggest takeaway is a feeling of loss -- seeing in black and white exactly what COVID-19 has taken from us, including nine ranked teams. Ohio State checks in at No. 2 (with 21 first-place votes), and there's a good case to be made that no roster in the country is packed with more talent. If we've seen the last of Justin Fields, that's a real shame. We won't get the Clay Helton hot-seat watch (USC checks in at No. 16); we won't see Tanner Morgan's follow-up performance (Minnesota at No. 18); we won't get a taste of what might be the best defense in the country (Oregon at No. 8). But at least this preseason Top 25 offers some hint of normalcy in a year when that's been a scarce commodity. We can argue over rankings, debate the snubs and keep our fingers crossed that No. 1 Clemson, No. 3 Alabama and the other teams still hoping to play will get their chance. -- David M. Hale

What a delight to receive the preseason AP Top 25 poll. It's like receiving an email from my fantasy planet, where I can still eat chocolate chip cookies and guzzle Diet Cokes, where I can read without finding my reading glasses, where I tee it up and break 80. Forget the rankings themselves. That the AP released the poll, complete with teams that aren't playing -- why not include 1995 Nebraska? 1972 Dolphins? -- is a reminder that someday, somewhere, we will put away our masks, get our COVID-19 vaccines, and return to what we fondly remember as our normal lives. You know, the ones where we mock preseason polls. -- Ivan Maisel

This is my favorite AP Poll of all-time, because it really captures how the poll -- now more so than ever -- doesn't hold a lot of meaning. The poll only means as much weight as you want to give it (which, for some fans, is an awful lot!). There's a chunk of teams in this that won't be playing this year, like Ohio State, who received 21 first place votes. LSU got a "respect" first place vote on some, "They're No. 1 until they get knocked off!" type of stuff. -- Harry Lyles Jr.

What to make of the ranking for defending champion LSU?

LSU is ranked too high, which is something I wouldn't have said six months ago. Back then, I liked the Tigers more than a lot of people did, especially with Ja'Marr Chase returning, Myles Brennan taking over at quarterback and a defense I believed might be better -- or at least more consistent. But the pandemic has put such a high price on depth, and that's what worries me. The starters are good, but the experience behind them is lacking. Cornerback Kary Vincent and defensive lineman Neil Farrell have already opted out. Injuries or a few positive COVID-19 tests could expose a team that lost too many good players to the NFL in the span of one offseason. -- Alex Scarborough


While I'm not surprised to see LSU at No. 6, the placement reinforces that Ed Orgeron's program doesn't yet get the benefit of the doubt like Alabama, Clemson, Ohio State and even Oklahoma and Georgia. Joe Burrow was a transcendent player, the type of quarterback LSU never seemed capable of developing until last season. LSU also loses passing game architect Joe Brady and excellent players on both sides of the ball. But three teams LSU beat on its way to the title -- Alabama, Georgia and Oklahoma -- also lost record-setting quarterbacks and remain ranked ahead of the defending champs. All three have significant questions. LSU's position isn't a total sign of disrespect, and a case can be made that the Tigers should be even lower. But it shows the need for the program to show it is more than a one-year wonder and will be a regular factor in the CFP and the Heisman race. -- Adam Rittenberg

The preseason polls are a waste of time! They're so silly! We hear that every year from frustrated college football fans, but it rings so true this year. The 2020 preseason poll clearly isn't worth the paper it's printed on, with nine of the Top 25 teams not even playing this fall. Will the teams that play this fall be included in the preseason spring Top 25 if spring football is played? It's hard to argue with any of the remaining selections because, well, they're about the only teams left playing. I'd say North Carolina is underrated because the Tar Heels, in my opinion, are clearly the third-best team in the ACC behind Clemson and Notre Dame (doesn't that sound weird), but UNC would be No. 12 if you eliminate the teams that aren't playing this fall. The SEC makes up nearly half of the remaining 16 teams, and that's probably about right. Heck, you might as well throw in South Carolina and Kentucky at this point. -- Mark Schlabach

Is it true? Could it be? The ACC has two teams ranked in the top 10? Notre Dame playing an ACC schedule at least gives the conference a chance to quit having to defend itself for having one dominant team and then everyone else. So what if it is only for this totally abnormal, strange season, with nine preseason teams that will not even play a down of football. North Carolina gives the ACC three ranked teams, and truth be told, Louisville deserves to be in the Top 25 right there with them. It is not a surprise to see Clemson sitting at the top spot, but given the 10-game league schedule, Notre Dame and what should be an improved product across the league, this could be a better season for the ACC than what we have seen in recent years. -- Andrea Adelson

Notre Dame is ranked No. 10 in the poll, but if you take out the teams that won't be playing this fall, the Irish are the seventh best team. The program finished 11-2 last season, and the two losses came by six points against Georgia, then a blow out against Michigan. While it still isn't part of a conference, the football team is playing in the ACC this season, which means we'll get to see Notre Dame against Clemson, Louisville and North Carolina during the regular season. The Irish have a good amount of production to replace on both offense and defense, but there is still quite a bit returning. Quarterback Ian Book, safety Kyle Hamilton and some of the incoming recruits that are expected to contribute early should all make an impact. There hasn't been a lot of talk around Notre Dame, but maybe there could be midway through the season. -- Tom VanHaaren

Four Big 12 teams were included in the AP preseason poll, and it was surprising not to see Kansas State slide in somewhere near the bottom. That's not to suggest that the Wildcats are ready to make a run at the Big 12 championship, but this will be a team that takes on even more of Chris Klieman's personality in his second season in the Little Apple. There were glimpses a year ago as Kansas State won eight games and was the only team to knock off Oklahoma in the regular season. As a "reward," the Wildcats get to open their Big 12 slate this season against the Sooners on Sept. 26 in Norman. That one might not be pretty. But with veteran quarterback Skylar Thompson returning, don't sleep on the Wildcats in Year No. 2 under Klieman, who knows a little something about winning football games. Go check out his resume' at North Dakota State. -- Chris Low

And those non-Power 5 teams?

With two AAC teams in the Top 25 and a third narrowly missing out, I'm honestly fascinated with what might happen if the fall season reaches completion and the AAC champ, be it Cincinnati (No. 13 among teams scheduled to play this fall), UCF (No. 14), Memphis (No. 17) or someone else, reaches the finish line unbeaten. The Power 5 is currently a Power 3, and the winner of the No. 4 league will likely be quite good. Good enough to get a College Football Playoff bid, perhaps? -- Bill Connelly

Little margin of error for these teams

Oh lawd, look at the lower half of these rankings. There are more legacy selections there than at a greek rush meeting. Tennessee, UNC, USC, Michigan, Texas, Texas A&M. All are legendary programs that no doubt make college football more interesting when they are relevant. But all also have serious issues that will likely keep them from finally getting over the hump, from the division where they live (Aggies) to lack of confidence in their leadership (Trojans) to an inability to win the games by which you are always measured (Wolverines). I'm always fascinated by that debate around the brand name teams, the "what we want them to be" versus "what they actually are." I have no doubt they are all good and some have the potential to be great. But we've been waiting on them all to return to former glory for a while now, in some cases a long while, and not a team on this list has contended for a national title in years, even when these polls have made them feel like contenders by placing numbers next to their names in August. -- Ryan McGee

The group at 13-14-15 is a fascinating one that could go myriad directions. Texas A&M and Texas both have senior quarterbacks returning and a lot of experienced talent on the roster, but drastically different staff situations. The Aggies, who are in their third year under Jimbo Fisher, have been relatively stable, while Tom Herman, in his fourth, overhauled his staff. The on-field effects of that -- particularly in this unique year -- will be interesting to see. Similarly, Oklahoma State -- which has a superb skill-position trio in Spencer Sanders, Chuba Hubbard and Tylan Wallace -- has some real high-end potential. -- Sam Khan Jr.

Unlike this poll, once the season starts, the AP will require voters to rank only teams that are scheduled to play. At that point, it's obvious that the SEC will load up in the top 10. But for now, what stands out is that the Big 12 will have three teams -- Oklahoma, Texas and Oklahoma State -- right there in the top 11. Oklahoma has won the conference every year since 2015, but if those two challengers at the top are as good as advertised, along with Brock Purdy and a tough Iowa State team, the Sooners -- who were 5-1 in six games decided by a touchdown or less last season -- don't have much margin for error. -- Dave Wilson 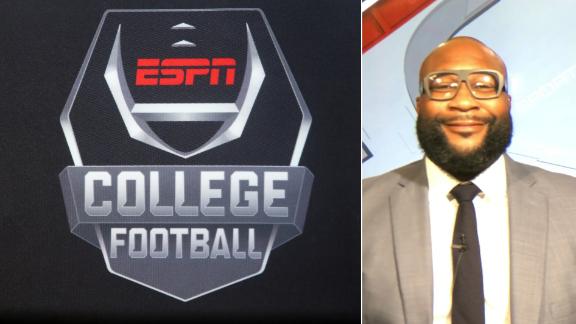 Spears questions AP poll ranking Big Ten, Pac-12 teams
Marcus Spears reacts to the AP preseason poll's inclusion of teams from the Big Ten and Pac-12, even though those schools have postponed their fall seasons. 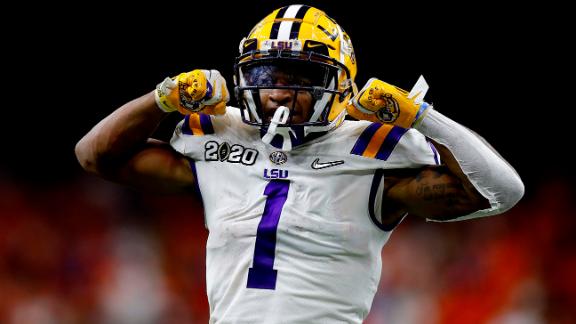 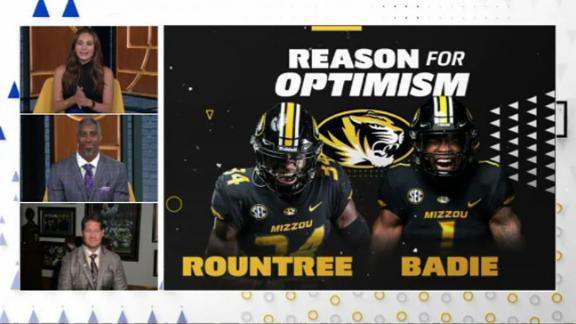