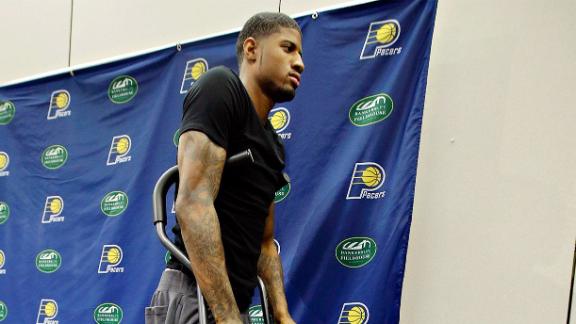 INDIANAPOLIS -- Indiana Pacers president Larry Bird hopes Paul George can return to the game this season after breaking his leg in a gruesome accident last summer -- perhaps as soon as next month.

Bird told reporters Tuesday that if George is cleared by doctors and ready to play, he would like to see the two-time All-Star compete.

"It seems like every week Paul is getting better and better," Bird said. "So if we do have an opportunity to get into the playoffs and [George] can get some games under his belt and get ready to go next year ... I always say if a player is ready to play, they gotta play.

"We're not going to hold him back if he's able to go out there and play. When you're out like that, you lose something. ... I still think it's important if he's able to play, he should be out there."

George hasn't played since sustaining a compound fracture in his right leg on Aug. 1. Bird says he had been told a full recovery would take about seven months.

Coach Frank Vogel would not say how much work George is doing in practice, but his activity has steadily increased. Vogel says getting into game shape and rhythm could add another month or two to the recovery process, but he agreed with Bird's assessment.

Even George got in the act, taking to Twitter on Tuesday to possibly refer to a target date for his return.