Pacers look forward to having Paul George at full strength, in new position 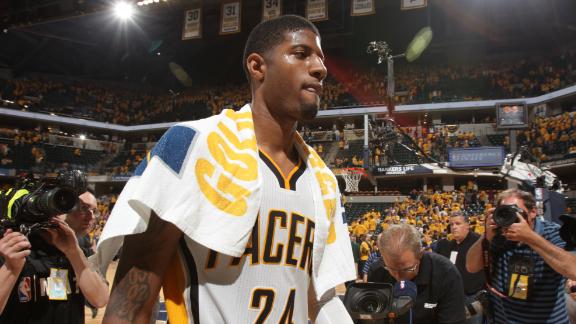 Paul George says he is healthy and ready to help the Indiana Pacers rebound in 2015-16 after missing the playoffs last season -- even if it means he has to play power forward.

George, more than a year removed from surgery on his broken right leg, told ESPN.com on Thursday that he "isn't too thrilled" about changing positions but is "open" to make the change if it's what's best for the team.

"I pride myself on being a ballplayer first and foremost, but there's a difference playing the 4," George said, "and I know that's the way the league is going, having stretch 4s and perimeter-oriented big men, but those guys have been doing that for years and have size on me and strength on me.

"So it's gonna be an adjustment. And I'm just used to being at the 3, and that's what made me special is just being able to guard perimeter guys."

"I feel great," George said while promoting his being on the cover of MyNBA2K16, the companion mobile app to "NBA 2K16." "All of the rehab and working out that I've done over a full year has kind of paid off at this point. My body feels amazing. I'm ready to start [the season]. I feel like that whole injury era is behind me and I'm back at being 100 percent again, and I'm ready to hit the ground running."

Pacers president of basketball operations Larry Bird likes where George is at.

"He looks pretty good to me," Bird told The Associated Press. "He runs a little different than he did last year. He looks stronger. He stops better. He looks like Paul George to me."

Five months after winning the NBA Most Improved Player Award after 2012-13, George signed a max contract with Indiana. Five months after that, he made his first All-Star start. By the end of the 2013-14 season, George had helped Indiana capture the top seed in an Eastern Conference still ruled by LeBron James' Miami Heat and was just starting to rake in some endorsement deals.

Everything changed the instant his right leg snapped during a Team USA scrimmage on Aug. 1, 2014.

When George beat the odds and made it back for the final six games last season, he didn't seem himself. He came off the bench, played limited minutes and missed a dunk in his season debut.

George described what it was like not being able to play until the end of last season.

"It was depressing to not be able to do what you love to do and just to be sidelined," he said. "I think I would've felt a lot better if we were a team that was in the playoffs to begin with and not fighting for our lives to just try to make the playoffs, so it was rough. It was rough. But I knew at some point that one day this would all be over with, and I'll be back to doing what I do."

Vogel said George is under no medical restrictions and that he would play George less during early preseason games. His workload, Vogel said, will increase throughout October to have him ready to go for the Oct. 28 season opener at Toronto.

George said he believes he can get back to being the elite player he once was.

"Again, I think having the focus that I had over the summer has prepared me for this moment, and I'm not coming back hesitating, I'm not coming back second-guessing myself," he said. "I'm almost coming back as if I had a year to just look back at how I came to where I'm at and how can I get better and how can I improve off of that through a whole year. A lot of guys get about three months to work on their game. I feel like I had a whole year to really work on my game and work on my body, so I feel great coming into a new year."