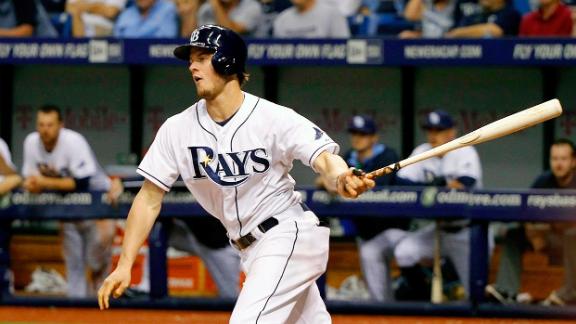 Washington will receive right-hander Joe Ross and shortstop Trea Turner as a player to be named later on June 14.

The Padres agreed to a deal for Matt Kemp of the Los Angeles Dodgers last week, and Myers would give an additional boost to a San Diego offense that ranked last in the majors with 535 runs scored and a .634 OPS in 2014.

Myers, 24, was a third-round pick by Kansas City in the 2009 first-year player draft. After he finished second in the minor leagues to Philadelphia's Darin Ruf with 37 home runs in 2012, the Royals sent him to Tampa Bay as part of a seven-player trade that brought pitchers James Shields and Wade Davis to Kansas City.

A.J. Preller, San Diego's new general manager, has been aggressive this offseason. The Padres fell short in free-agent pursuits of Pablo Sandoval and Cuban outfielder Yasmany Tomas before focusing their attention on trades.