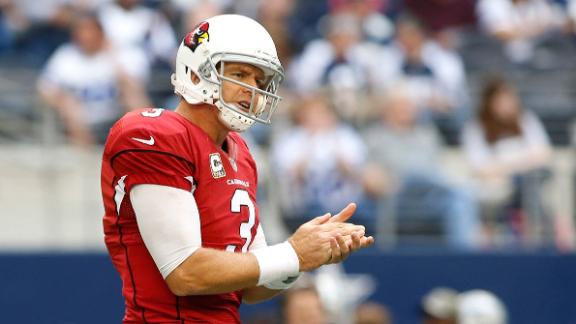 The Arizona Cardinals signed quarterback Carson Palmer to a three-year extension that keeps the two-time Pro Bowler under contract through 2017, the team announced Friday.

Contract terms were not disclosed by the Cardinals, but sources confirmed to ESPN that the deal is worth $50 million in total. It is guaranteed through 2015 and includes a guaranteed $20.5 million during that span, a source said. The average salary range is between $15.9 million and $16.6 million.

Palmer, who was due to enter free agency after this year, was slated to earn $9 million this season.

Palmer, 34, played in the season opener before an injury to his right throwing shoulder forced him to miss the next three games. He returned in Week 6 and is 5-0 this season for the NFL-best Cardinals (7-1).

"Carson has played at an incredibly high level and has been a huge part of the team's success," general manager Steve Keim said in a statement. "When you combine his on-field performance with the leadership, stability and professionalism he brings to our team, there was no question that we wanted to extend the relationship and we are excited he felt the same way."

Palmer joined the Cardinals in 2013 after being acquired in a trade from the Oakland Raiders. Since coming to the Cardinals, Palmer has a 15-6 record in his 21 starts in Arizona, which represents the best record for a modern-era Cardinals QB through his first 21 starts.

After years of individual production, Palmer finally paired it with team success in Arizona. Last season he compiled his first winning record since 2009, and he's on pace to experience consecutive seasons above .500 for the first time in his career.

Since Week 8 of last year, Palmer has a 12-2 record, the best mark in the NFL over that span, according to ESPN Stats & Information. Palmer has thrown just two interceptions this season -- a year after throwing 22 -- to accompany 11 touchdowns. He's the league's highest-rated quarterback on third down.

His streak of 18 straight games with a touchdown pass currently is tied with the New England Patriots' Tom Brady for the fourth longest in the NFL, and his run of six consecutive games with at least two touchdown passes is the second longest behind the Denver Broncos' Peyton Manning.

In 142 career starts, Palmer has completed 62.5 percent of his passes for 35,124 yards, 222 touchdowns and 154 interceptions. Last season, he became the first player to throw for 4,000 yards with three different teams.

Information from ESPN's Adam Schefter and Chris Mortensen is included in this report.