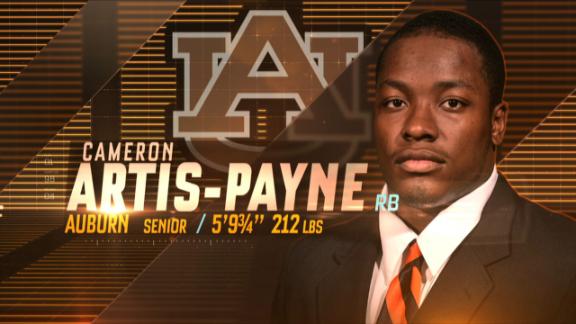 He was 20 years old and living at home. He was making minimum wage, putting together lawn tools at a Harrisburg, Pennsylvania, warehouse. He was 20 pounds heavier than when locals worshiped him on Friday nights two years earlier.

The cheers he once heard had been replaced by silent thoughts of what could have been had he focused in the classroom like he had on the football field.

"We all thought he was done," said Bill Chaplick, coach at the Milford Academy in New Berlin, New York, where Artis-Payne squandered Division I scholarship opportunities because of academics -- just as he had done at Harrisburg High.

But Artis-Payne hadn't given up. He believed he was as talented as LeSean McCoy, a Harrisburg legend who was already in the NFL. So Artis-Payne quit his job and planned a trip to Allan Hancock College, 2,700 miles away in Santa Maria, California. He went because one of his former coaches heard the school was looking for a running back.

One year later, Artis-Payne became one of the top backs in junior college. That led to a scholarship at Auburn, where he led the SEC in rushing this past season.

That led to the Panthers selecting the 5-foot-11, 209-pound back in the fifth round of the NFL draft. And many of those who had lost track of Artis-Payne are now wondering how 14 running backs were drafted ahead of him.

"The low point was that day I quit my job," Artis-Payne recalled Friday during Carolina's rookie minicamp. "I said, 'I can't do this no more.'"

Artis-Payne, who will turn 25 in June, has gone from failure to inspiration. His story is so powerful that former coaches can't wait for him to return and speak to current players about avoiding the academic pitfalls that kept schools from offering him a scholarship.

"It just shows his hard work, his dedication," said McCoy, 26, now with the Buffalo Bills after a six-year run with the Philadelphia Eagles that included an NFL rushing title in 2013. "Everybody is always telling you no, and you try to prove yourself, show them you can do it.

Artis-Payne isn't through proving himself. He didn't like being the 15th back drafted. He sees himself in the same class as Georgia's Todd Gurley and Wisconsin's Melvin Gordon, who were selected in the first round.

"At the end of the day, I've always got a chip on my shoulder," said Artis-Payne, who was McCoy's backup at Bishop McDevitt High before transferring to Harrisburg.

NFL draft analysts often referred to Artis-Payne being too tight in the hips and lacking the breakaway speed needed to be a top-round pick. Both are true. But Artis-Payne's bruising, between-the-tackles style fits perfectly into what Carolina does.

And as Allan Hancock coach Kris Dutra noted, look at the production.

"He doesn't look as explosive as Melvin Gordon and some of the other guys at times," Dutra said. "But people are going to be surprised by this guy."

Artis-Payne was so impressive when he arrived on Dutra's doorstep that the coach made phone calls to see why he was available.

Artis-Payne was noticeably out of shape despite working out on a regular basis at the Harrisburg YMCA. He was fat, but not sloppy fat, as Dutra described it.

"Once he got his body back in shape, I mean, all hell broke loose," Dutra said.

"In my 20 years of coaching, I've never seen anybody as competitive," Dutra said. "He just wanted to dominate."

Artis-Payne's next stop was Auburn. But, as in his early years at Bishop McDevitt High, Artis-Payne found himself stuck behind another great running back.

Tre Mason was the featured back in 2013, rushing for 1,816 yards to break Bo Jackson's 1985 single-season school record of 1,786. Artis-Payne ranked third on the team with 610 rushing yards. Quarterback Nick Marshall had 1,068 out of coach Gus Malzahn's no-huddle offense.

Last season, it was all Artis-Payne. He rushed for 1,608 yards to rank third on the school's single-season rushing list.

The Panthers believe Artis-Payne can not only be the complement to starter Jonathan Stewart, a first-round pick in 2008, but carry the full load if Stewart is injured.

Former Harrisburg coach George Chaump lost track of Artis-Payne until one day he turned on the television and there was his former star, playing for Auburn.

"He's determined," said Chaump, 79. "I'm telling you, he has more determination than anybody I've ever known."

"The one word that describes him is perseverance," Chaump said. "He finds the way to win and get it done. He's going to surprise you. He's not that fast, but give him the ball and they don't tackle him."

"Give the kid a chance and he'll produce."

Artis-Payne's production went beyond football. He also was a solid point guard and was ready to give up football to pursue basketball during his junior year of high school. But because of his size -- he was 5-9 at the time -- and his potential as a running back, his father and Chaump joined in a full-court press to keep the focus on football.

"I said, 'Well, I hear what you say about basketball, but you're going to play football,'" David Payne said with a laugh. "I was right."

The one thing he didn't get across was the importance of high school academics.

"The bottom line is, when you're a kid, sometimes you don't listen to everything," Payne said. "He got sidetracked after he got into high school. He didn't take the academic part seriously. He wasn't involved in things you need to make yourself 100 percent successful."

That changed with maturity and the harsh reality of life working in a warehouse.

"Maturity was the biggest thing," said Artis-Payne, who made the SEC academic honor roll while at Auburn. "Once I got that part down, I was all right."

Artis-Payne exploded through a hole on the left side on his first carry of Carolina's rookie camp. He didn't stop running until he reached the end zone.

An hour later, wearing the No. 34 franchise-leading rusher DeAngelo Williams owned before the Panthers released him in February, Artis-Payne was surrounded by reporters.

This was a high point.

"It just hit me, coming out here, that it's time for the NFL," Artis-Payne said. "You dream about it as a kid. Now it's really here."

Artis-Payne exudes confidence. He's not afraid of what will come next because in his mind he already has overcome the worst.

"For us, he's a blue-character kid, which means he gets it," Panthers general manager Dave Gettleman said.

That Artis-Payne hasn't finished proving himself makes him even more driven to succeed.

"Those other teams that didn't pay attention, they'll see," David Payne said. "Not disrespecting those guys, but there's no way in the world this kid was the 15th-best running back. That's really a smack in his face.

"As I've told him the whole time, this is your path. At every level, you had to prove yourself. This is what you do."

Chaplick has a bulletin board where he posts stories to inspire his players. He already has a place to post stories on Artis-Payne. He has no doubt there will be many.

"When he gets to the NFL and gets out of his rookie year, I want him to come back and tell his story," Chaplick said. "Because it's a great story."