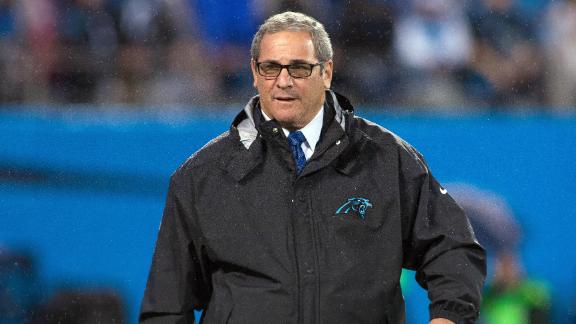 The move comes nine days before the Panthers are scheduled to report to training camp at Wofford College in Spartanburg, South Carolina.

The team offered no immediate reason for Gettleman's dismissal.

Williams, Smith and Norman all responded to Gettleman's dismissal on Twitter.

Smith is the Panthers' all-time leading wide receiver (12,197 yards), and Norman was released during the 2016 offseason after he made the Pro Bowl in 2016.

Williams, currently a free agent, recently told ESPN's Adam Schefter that there were four teams he would not consider playing for: the Dallas Cowboys, Jacksonville Jaguars, Cleveland Browns and Panthers. Carolina apparently is now an option again in Williams' mind with Gettleman's firing.

Retired Pro Bowl linebacker Jon Beason, who was drafted by the Panthers in the first round in 2007 and played for the team until he was traded a few games into the 2013 season, also spoke out after Gettleman's firing.

He told WFNZ-AM The Fan in Charlotte that Gettleman had accused him of faking an Achilles injury that cost him most of the 2011 season.

Beason, now a CBS Sports NFL analyst, also said on the network that he wasn't pleased with how Gettleman handled his trade.

"It kinda came full circle," he said. "The way that the trade went down between the Giants and the Panthers when I moved on from the Carolina Panthers, it was done in a way that wasn't classy. I didn't want to be the disgruntled player who's saying this, saying that because he was traded. But at the end of the day, you're a first-round pick, you played extremely well for an organization, you're one of the key guys on the team, a new GM comes in and doesn't even give you a handshake on your way out the door."

Gettleman's firing comes as two of the team's more prominent players are seeking contract extensions. Linebacker Thomas Davis is in the final year of his contract and was hoping for an extension before the start of training camp. Pro Bowl tight end Greg Olsen is also hopeful of an extension, although he has two years left on his current deal.

The Panthers were 40-23-1 under Gettleman's leadership, making the playoffs each season from 2013 to 2015, with the general manager instrumental in the Panthers' going 15-1 and reaching the Super Bowl during the 2015 season. But Carolina took a step back last season, going 6-10 and finishing last in the NFC South.

"After much thought and a long evaluation of our football operations, I have decided to relieve Dave Gettleman of his duties as general manager," team owner Jerry Richardson said in a statement. "I want to thank Dave for the role he played in our success over the past four seasons. While the timing of this decision is not ideal, a change is needed."

Whoever is hired to replace Gettleman will be the third general manager head coach Ron Rivera will have worked with, as he was already in his position when Gettleman was hired.

Richardson did not say who would be responsible for personnel in the interim. The Panthers are also without a team president, as Danny Morrison resigned in February.

Gettleman has more than 30 years of NFL experience, mostly in scouting departments with the Buffalo Bills, Denver Broncos and New York Giants.