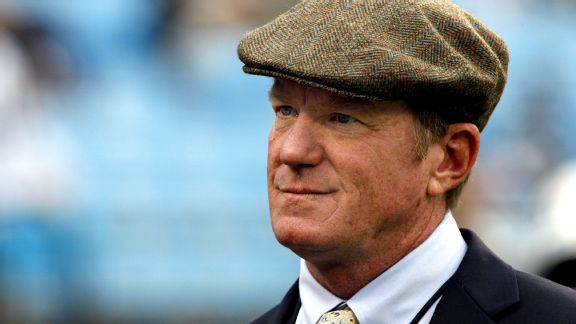 Marty Hurney, who interviewed for the full-time GM job last week, informed the team of the complaint Sunday, and the team then informed the league office, Drummond said.

NFL spokesperson Brian McCarthy said the league will investigate Hurney's situation under its personal conduct policy. That investigation will continue even though the complaint has been dropped.

This comes about two months after the NFL opened an investigation into allegations of workplace misconduct by team owner Jerry Richardson. A December article in Sports Illustrated said at least four former employees were paid to keep quiet allegations of sexual harassment and the use of a racial slur directed at a former team scout.

Kathleen Lucchesi, one of Marty Hurney's attorneys, told ESPN that the allegations against her client were "absolute fiction" and part of a continued trend of allegations since the Hurneys began divorce proceedings in 2013.

"This is false. Made up in her mind," Lucchesi said.

Lucchesi said Marty Hurney is "very upset'' about the allegations and how they might impact his becoming the full-time GM. The Panthers also interviewed Jimmy Raye III, the Houston Texans' assistant general manager; Lake Dawson, the Buffalo Bills' assistant director of scouting; and Martin Mayhew, senior personnel executive with the San Francisco 49ers.

Hurney was considered the front-runner, and the team was expected to announce its full-time GM this week.

Lucchesi said the next step is to get the Panthers to lift the administrative leave. She noted her client is "anxious" to get back to work at an important time as teams are evaluating their own talent and preparing for the draft and players from other teams are heading into free agency.

Drummond said there are no plans to lift the leave until after the NFL investigation is complete. Those typically take several weeks, sometimes a month or more.

District Judge Ronald Chapman on Friday heard the complaint, first reported by the Charlotte Observer. The judge refused to issue an immediate restraining order against Marty Hurney, saying there was no evidence that acts of domestic violence had occurred.

Chapman scheduled a hearing for Feb. 16 that now will not be held after the notice of dismissal was filed on behalf of Jeanne Hurney on Tuesday.

Marty and Jeanne Hurney completed their divorce in January 2014. Marty Hurney has since remarried.

"Even though Marty has remarried, Ms. Hurney has continued her baseless assault on Marty's character,'' said Lucchesi, noting the judge's denial of an ex parte protective order was significant because the bar for granting such orders is very low in terms of evidence needed.