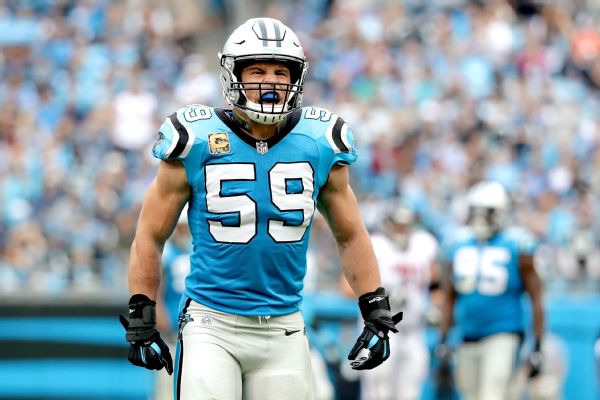 The surgery, first reported by The Charlotte Observer, was on his right shoulder and is why Kuechly was a late scratch last month from the Pro Bowl.

Kuechly suffered the injury late in the season, but he did not miss a start while showing up on the injury report.

It is unclear how much of the offseason workouts Kuechly will miss. Based on his previous surgery, the team is hopeful he'll be ready for the season.

Kuechly underwent surgery following the 2015 season to repair a partially torn labrum in his left shoulder suffered in a late-season game against Tampa Bay. He played with the injury throughout the playoffs and in Super Bowl 50, but wore a brace.

He was limited in offseason workouts but was ready for the start of training camp, although he wore the brace earlier in camp and was limited some early.

Kuechly missed one game last season after going into the concussion protocol. He still led the team with 125 tackles -- his sixth straight season with at least 100 tackles since being selected in the first round of the 2012 draft.

Kuechly is the second Carolina defender to have shoulder surgery following the season. Defensive end Julius Peppers recently posted a picture on Instagram showing he is recovering from a procedure.