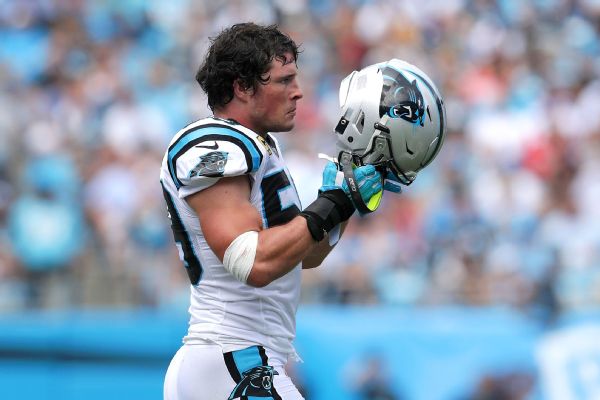 CHARLOTTE, N.C. -- Carolina Panthers Pro Bowl middle linebacker Luke Kuechly on Friday was ruled out for Sunday's game at Chicago with a concussion.

Wide receiver Kelvin Benjamin was listed as questionable after missing the past two days with swelling in his left knee that was surgically repaired in 2015. He practiced Friday and is expected to play against the Bears.

This will be the 10th game Kuechly has missed since 2015 after going into the NFL's concussion protocol.

Kuechly missed three games in 2015 and six games last season after suffering a concussion. The final three games missed in 2016 came after Kuechly was cleared from the protocol, but he was held out as a precaution with the Panthers out of playoff contention.

Coach Ron Rivera said he would use the same caution with Kuechly this time, even though the Panthers (4-2) are in the thick of playoff contention.

Rivera sounded optimistic that Kuechly would not miss as much time with this one.

Rivera said Kuechly will see the doctor Monday morning and left open the chance that the four-time Pro Bowl selection could play Oct. 29 at Tampa Bay.

The 2013 NFL Defensive Player of the Year was placed in the protocol after taking a hard hit to the shoulder and neck area in a 28-23 loss to Philadelphia on Oct. 12.

He was listed as did not participate in practice on Friday -- as he was Tuesday through Thursday, despite participating in some individual drills during the media portion of practice each day.

The injury report said concussion protocol Wednesday, but it was changed to concussion on Thursday and remained that way Friday.

Center Ryan Kalil, who hasn't played since the opener because of a neck injury, returned to full practice this week and is scheduled to start against the Bears.

Safety Kurt Coleman (knee) also has a chance to return after missing the past two games. He is listed as questionable.