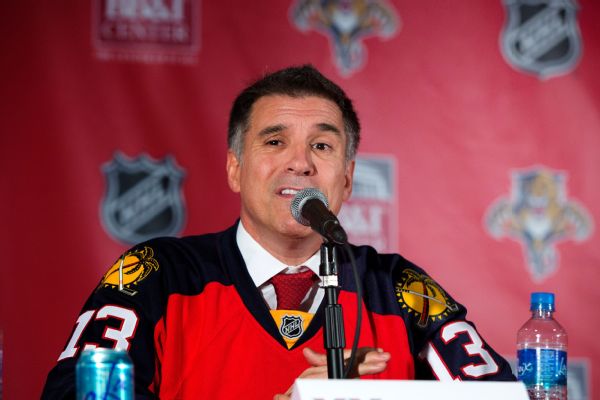 Viola, a 1977 West Point graduate who bought the Panthers in 2013, will need to be confirmed by the Senate. If that happens, then -- pending NHL approval -- ownership of the Panthers would remain in the Viola family, and his roles as chairman and governor of the club would be filled by Doug Cifu, a partner in the ownership group.

"It is an honor to be nominated to serve our country," he said.

"Whether it is his distinguished military service or highly impressive track record in the world of business, Vinnie has proved throughout his life that he knows how to be a leader and deliver major results in the face of any challenge," Trump said in a statement. "He is a man of outstanding work ethic, integrity and strategic vision, with an exceptional ability to motivate others."

Viola's Army ties run deep and have carried over into his leadership of the Panthers. The team has held training camps and played exhibition games at West Point, has several West Point graduates and military veterans working in the front office, and incorporates some military thinking into its day-to-day marketing strategies.

"Our hockey team has always been proud to be part of Mr. Viola's legacy," Panthers president of hockey operations Dale Tallon said. "We admire his dedication to his country and are excited to watch him pursue this new endeavor."

Trump, in announcing Viola as his pick, said he was "living proof of the American dream."

Viola founded Virtu Financial, an electronic trading firm that has a multibillion-dollar valuation. He is listed 374th on Forbes Magazine's top 400 with a net worth of $1.8 billion.

Viola's father served in the Army during World War II. Viola became the first member of his family -- Italian immigrants living in Brooklyn -- to attend college. He served in the 101st Airborne Division, then was part of the U.S. Army Reserve after his active duty.

He's a graduate of New York Law School, has long been involved with philanthropic projects and is a past winner of the Ellis Island Medal of Honor. In 2003, he founded and helped fund the creation of the Combating Terrorism Center at West Point.

"We could not be more proud for Vinnie and his dedication to our country," Panthers president and CEO Matthew Caldwell said.

"The club has assured us that the day-to-day operations of the Panthers' franchise will not be affected by this development, and we will certainly work closely with the club to ensure that is the case," the NHL said in a statement. "Mr. Viola and team ownership have further advised that they remain completely committed to South Florida and to the Panthers' fans."
Related topics:
sportsespnownerdonald j trumpnhlsecretary of the armyvincent violaflorida pantherspresident elect
Copyright © 2020 ESPN Internet Ventures. All rights reserved.
More Videos
From CNN Newsource affiliates
TOP STORIES