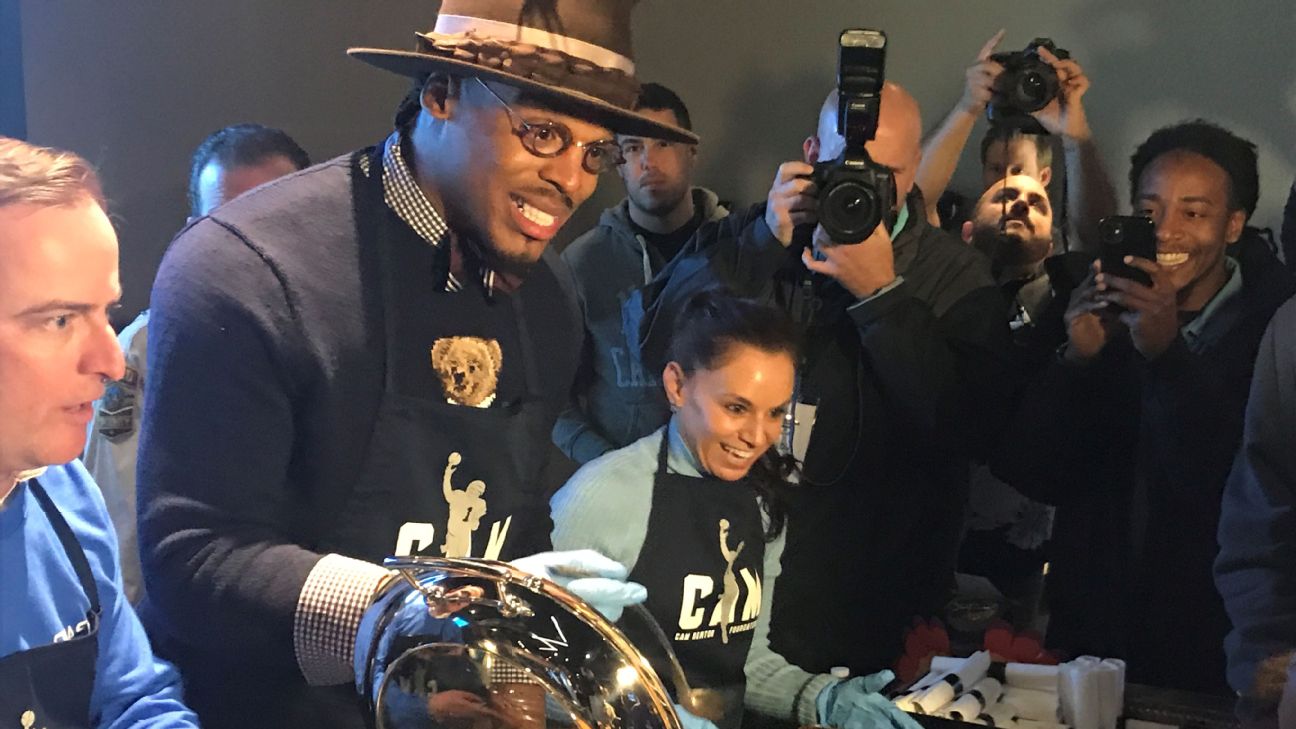 CHARLOTTE, N.C. -- The biggest question Cam Newton got while dishing gravy, dressing and other fixings at his annual Thanksgiving Jam on Monday night wasn't whether he would be the quarterback of the Carolina Panthers next season.

"Did I make the food?'' Newton said with a smile while helping serve more than 1,300 underprivileged kids at Topgolf Charlotte.

However, Newton's future with the Panthers has come into question since being shut down and ultimately placed on season-ending injured reserve after an 0-2 start because of a Lisfranc injury originally suffered in training camp.

The 2015 NFL MVP did not take questions about his future from reporters attending his event, but the Atlanta native made it clear he hopes to be here beyond the last year of his contract in 2020.

"Charlotte is home,'' Newton said. "Charlotte is a place I know people know me. They're not just assuming. They know how I am. They know my energy. They know what I like and what I don't like. For me to have that type of presence, it just reminds me that ... it's right.

"We're looking forward to countless more years in Charlotte to impact the community in ways outside of the game of football.''

Team owner David Tepper made a brief appearance at Newton's event, and his wife, Nicole, helped serve food. Tepper made it clear last week that a decision on Newton's future with the team hasn't been made and the first priority was getting the first pick of the 2011 draft healthy.

"It means a lot,'' Newton said of having Tepper at his event. "Him and his wife, just the unwavering support from them. There's so many people that help along the process to make my life easier.

"From comments to text messages to voicemails to phone calls, it's just great to see certain people never changing up on you and knowing you can always depend on certain people.''

This was the first time Newton took questions of any kind from reporters since playing in a Week 2 loss to theTampa Bay Buccaneers. He admitted it meant a lot having kids yell they missed him on Monday amid what he called "trying'' times while dealing with the injury.

"It's been a trying year for me in multiple ways,'' Newton said. "But at the end of the day, being around this type of atmosphere helps you.''

Newton's future with the Panthers, who are 5-6 after a 34-31 loss at theNew Orleans Saintson Sunday, could hinge on several things. Beyond getting healthy, another factor will be whether the current coaching and management staff remains intact if Carolina misses the playoffs for the third time in the past four years.

Tepper said a week ago he would not accept "long-term mediocrity'' and repeatedly talked about how he hated to lose. The Panthers are 12-15 since Tepper purchased the team before the 2018 season for an NFL record $2.275 billion.

If Tepper makes a change from coach Ron Rivera and general manger Marty Hurney, the new staff would have a say in Newton's future.

How well Newton's replacement, Kyle Allen, plays the rest of the season also could weigh into a decision. Carolina is 5-4 this season with Allen and 6-4 overall going back to the final game of the 2018 season. He has a current cap number of $495,000.

Whether to invest the $19.1 million the organization would save in cap space by releasing Newton next season also could be a factor, with running back Christian McCaffrey heading into the final year of his rookie deal next season and the contracts of other key players expiring after the current season.

Newton has heard all the speculation, which is another reason that the past few months have been difficult and why Monday's event personally was so uplifting.

"I don't want to sound like I'm suicidal,'' Newton said. "It's just been tough. I was in a place where I wasn't used to being. And you know a team you're a part of is equipped with everything except for your presence, so to speak.

"Being in the position I am, being away from the game and missing the support and on-field interaction with the fans, and when you finally do come out to a showing like this in the first time in eight or nine weeks, that's what you miss the most.''
Report a correction or typo
Related topics:
sportsespnnewsnflcarolina pantherscam newton
Copyright © 2020 ESPN Internet Ventures. All rights reserved.
More Videos
From CNN Newsource affiliates
TOP STORIES