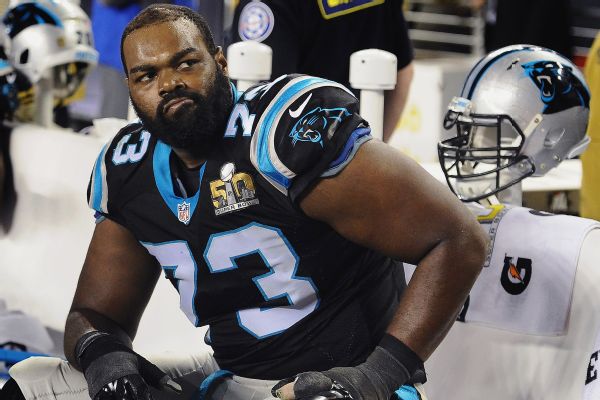 CHARLOTTE, N.C. --Panthersoffensive tackle Michael Oher, who has been in the NFL concussion protocol since September, was released Thursday after failing a physical.

It was the second move made by interim general manager Marty Hurney since being hired Wednesday. Earlier in the day, he gave right guard Trai Turner a four-year, $45 million extension with $20.45 million guaranteed.

Oher tweeted Thursday after his release that the "brain is a scary thing."

Oher, 31, is guaranteed $900,000 as part of injury protection benefits. His release saved the Panthers $1.69 million toward the salary cap. Hehad three years remaining on his contract after signing an extension last season.

"The most important thing is his health," Panthers coach Ron Rivera said, according to the team's website. "Michael's health always came first. We were not going to force the issue. Michael understood and we expressed that to him."

Oher had planned to report to training camp, a league source told ESPN last week, but his future with the team remained in doubt because of the concussion.

The Panthers appeared set to move on with Daryl Williams and rookie Taylor Moton at right tackle after a June minicamp. Oher reported for the camp but never took the field.

Oher was a first-round draft pick in 2009 and played in two Super Bowls, winning a championship with the Baltimore Ravens in February 2013. He was best known because his life story was the catalyst for the 2009 movie "The Blind Side," starring Sandra Bullock.

Oher is set to appear in a Nashville, Tennessee, court on Friday. He faces a misdemeanor assault charge, stemming from an altercation with an Uber driver in April.