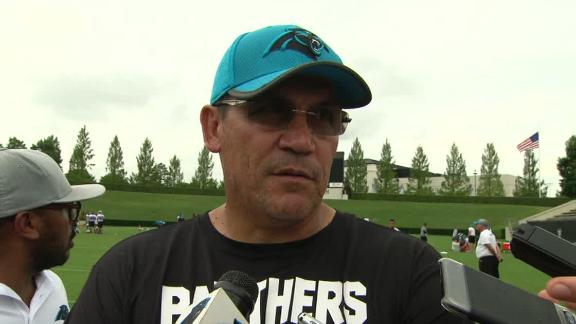 SPARTANBURG, S.C. -- Carolina Panthers coach Ron Rivera says he wouldn't mind if quarterback Cam Newton didn't play in any of the preseason games as the 2015 NFL MVP continues to rehab his shoulder.

"I'd be OK with it,'' Rivera said after Friday's practice.

That doesn't mean Newton won't play in next Saturday's game at Tennessee or the following week at Jacksonville after missing Wednesday night's preseason opener against Houston.

Newton hasn't played in the final preseason game since his 2011 rookie season, so there's not much likelihood of him facing Pittsburgh on August 31.

"We're going to do exactly what the trainers and doctors allow us to do,'' Rivera said.

Rivera reiterated what he has said since training camp opened, that Newton's target date is the Sept. 10 opener at San Francisco.

"Every day is a new day,'' Rivera said of his quarterback who had surgery to repair a partially torn rotator cuff on March 30. "As long as he continues to progress, we'll keep doing what we're doing.''

Newton increased his workload during a hot, muggy Friday at Wofford's Gibbs Stadium, throwing in individual drills for the first time in 12 days.

Once team drills began, Newton made a few handoffs but left the throwing to third-string quarterback Joe Webb and fourth-stringer Garrett Gilbertwhile backup Derek Anderson got the day off.

If Newton has no soreness or setback when evaluated on Saturday morning, the reps could increase.

"Like I've been telling you guys, it's just a matter of time,'' Rivera said. "He'll continue to do his workouts with the training staff, and each day as long as he continues to progress, we'll throw him more and more.''