Panthers: Team diversity could serve as example to unite people

ESPN
By David Newton
The Panthers plan to play Sunday's game against the Minnesota Vikings at Bank of America Stadium despite violent protests taking place in the city.

More than that, they want to play unless the protests stemming from a Tuesday shooting escalate over the next couple of days as they did Wednesday night.

"I think it would be good for the city,'' coach Ron Rivera said on Thursday.

The protests began Tuesday night after a black Charlotte police officer shot and killed Keith Lamont Scott, who also is black, in an apartment complex parking lot about 15 minutes from Bank of America Stadium.

The protests moved within a few blocks of the stadium on Wednesday night, turning violent with gunshots, vandalism and police setting off tear gas bombs in an attempt to break up the protesters.

Rivera said he has faith that city leaders will get the protests under control soon. He has no reservations about the safety of his team or having his wife at the stadium.

The team issued a statement Thursday that said: "We are in contact with government officials, the Charlotte-Mecklenburg Police Department and the NFL. We are continuing to monitor events as we prepare for Sunday's home game."

Carolina shut down its open locker room to reporters early on Thursday and had outside linebacker Thomas Davis and Greg Olsen serve as team spokesmen.

Both agreed the game should be played on Sunday.

"This game absolutely should be played Sunday,'' Davis said. "I look at football as a way to bring people together ... I hope people know that violence is not the answer. It's not the way to solve this problem."

Olsen and Davis noted that the Carolina locker room, a mixture of different races, religious and political beliefs, could serve as an example.

"On Sundays, when people come and watch us, not only do people see that, but to a bigger level those people sitting in the crowd are from all walks of life, from all backgrounds, from all religious denominations,'' Olsen said. "But for one day, for one afternoon for a few hours, they all come together for a few hours around the Carolina Panthers.

The Panthers and the NFL are monitoring the situation downtown. Their primary concern is having enough police to handle the safety concerns of the city and keep the stadium secure.

The presence of the National Guard in Charlotte, according to a team source, helps that situation tremendously.

Many businesses already have told employees not to come downtown for work unless it is necessary. In fact, NASCAR has closed its Charlotte office for normal business Thursday.

During the unrest Wednesday night in Charlotte, windows were broken on the ground floor of the building where NASCAR offices occupy several floors. The building is adjacent to the NASCAR Hall of Fame.

The Charlotte Regional Visitors Authority, which operates the Hall of Fame, said exterior windows were damaged, but the facility will be open as scheduled Thursday.

In a statement, Charlotte Hornets chairman and owner Michael Jordan expressed his condolences to the Scott family and asked for calm.

"In light of the tragic events of the past three days, it is more important than ever that we restore calm and come together, as a community, in peaceful demonstration and conversation, and in constructive and non-violent ways.

"As part of the fabric of Charlotte, the Hornets organization is committed to working with civic leaders, our elected leaders and law enforcement to foster more trust, transparency and understanding so we can heal and grow together as a community," Jordan said.

Duke football coach David Cutcliffe said he planned to address the situation with his players.

"We love the city of Charlotte and it's sad and I haven't really gone into any detail with the team. I have a Thursday night meeting and it's on my agenda tonight. We know a lot of great change has come in this country through protest and through somewhat even loud voices and I think we always need that. But what we never need is violence. Just pray for peace. That's it."

San Francisco 49ers quarterback Colin Kaepernick has been kneeling during the anthem for the past month as a protest against social injustice in the United States. While some players around the country have joined Kaepernick's protest, members of the Panthers have not.

"Look how much backlash he took,'' Boston said. "That's a peaceful protest, am I right? When stuff like this happens in the world ... where are the people that are mad at Kaepernick for taking a knee? Is everybody still mad at him for trying to stand for something that is happening in this world?

"So do I see myself taking that knee? I don't know. I have to talk to some people and see if that's the best thing for me to do.''

Protests are anticipated on Sunday. During Wednesday night's protest, a man carrying a megaphone shouted that if quarterback Cam Newton stood during the national anthem, his No. 1 jerseys would be burned.

But Newton did post a message on Facebook on Wednesday saluting Kaepernick for "making a stand for injustice in this country.''

Newton typically doesn't publicly address social issues, but he made an exception Wednesday. He spent a majority of his weekly news conference addressing what is happening in Charlotte.

"I'm an African-American, and I'm not happy how the justice has been dealt with over the years and the state of oppression in our community,'' the NFL MVP said. "But we also as black people have to do right by ourselves. We can't be hypocrites.

"And I say that on one voice and also another voice that when you go public or when things happen in the community, it's not the fact that things are happening, it's the way they are being treated after they happen.''

That was the message sent by Olsen, Davis and Rivera on Thursday. That's why they chose to mix politics with football.

"This has to be a national discussion,'' Rivera said. "But at the same time we have to do it the right way.''

All three also agreed they will be able to focus on football on Sunday.

"The neat thing is when it's time to do football they've done football,'' Rivera said. "But when it's times like this that they have some comments, you do hear them talking about it, you hear them pretty open.

"As Greg and Thomas said, you look at the diversity, where they're all from, all races and colors, but yet they talk to one another, they care about one another. What has helped made this team strong has been what goes on in that locker room.''

Information from ESPN's Bob Pockrass was used in this report.

Thomas Davis: 'This game absolutely should be played'
Panthers LB Thomas Davis says Carolina's game should absolutely be played on Sunday, and TE Greg Olsen explains the personal decisions people will have to make about attending the game. 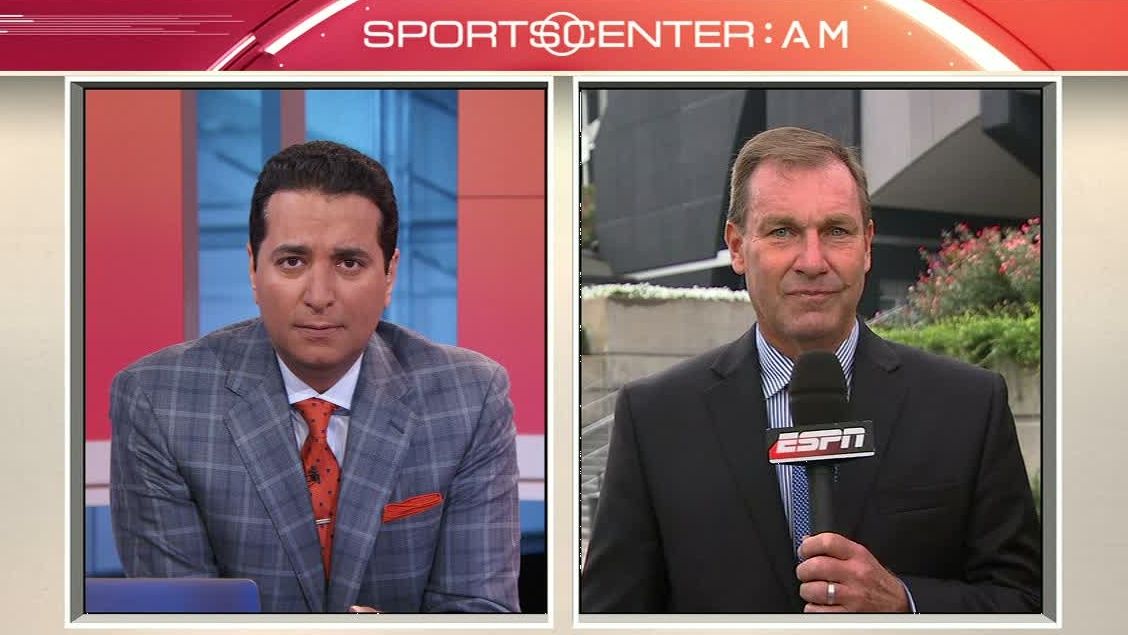 LATEST: Mayor to announce curfew for Raleigh on Monday