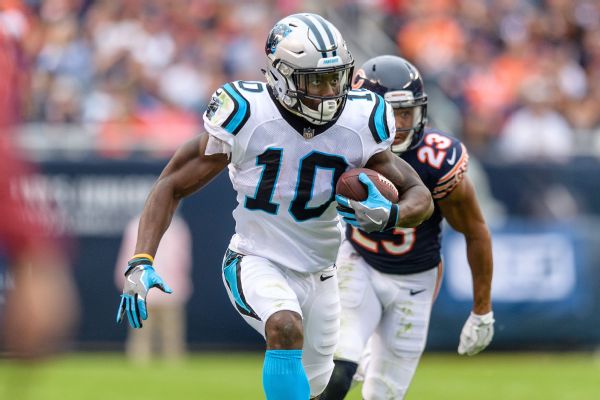 CHARLOTTE, N.C. -- Carolina Panthers rookie wide receiver Curtis Samuel is out for the season after suffering ligament damage in his left ankle during Monday night's win against Miami, the team announced Tuesday.

He will have surgery on the ankle, but no date has yet been set for the procedure.

The second-round pick out of Ohio State was just coming into his own after spending most of training camp and a portion of the first month of the season dealing with a hamstring injury and later an injury to the right ankle.

Coach Ron Rivera said earlier Tuesday there was concern that Samuel's injury would be season-ending, but he was awaiting MRI results.

Samuel had a season-high five catches on seven targets for 45 yards against Miami before suffering the injury, which occurred when a defender rolled over the ankle on a pass into the end zone. He had only 10 catches for 70 yards before Monday night.

"Is there anybody as fast as him?'' Shula said of Samuel. "... We're going to try hard to find ways to put guys in what they do best and then have them go do it.''

The good news for Carolina is Pro Bowl tight end Greg Olsen (broken foot) is set to come off injured reserve after this week's bye. He should be ready for the Nov. 26 game against the New York Jets.

Samuel was a big part of Carolina's plan coming into the season as the slot receiver because of his speed and playmaking ability. In terms of position flexibility, McCaffrey might be closest to Samuel, who also played running back at Ohio State.

McCaffrey, the former Stanford star, leads the team in receptions with 57 for 433 yards and three touchdowns.

"There's certain things they're similar at,'' Shula said. "That's another thing we would look at.''

Even after Samuel left the game, the Panthers continued to pile up yards and points in the 45-21 victory.