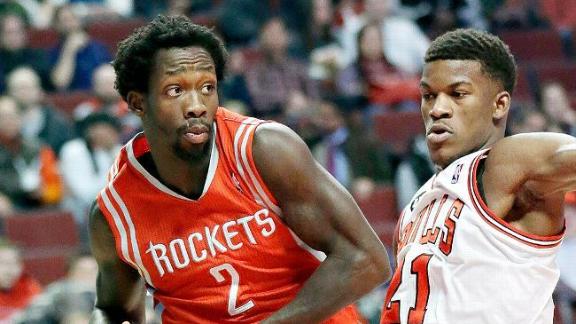 Beverley suffered the injury in the Rockets' victory Thursday night over the Philadelphia 76ers. He will be re-examined and gather opinions before deciding on a course of treatment.

Typically, there are several options in treating a torn meniscus, and they can keep a player out anywhere from a few weeks to four to six months.

The Rockets are also awaiting an update on center Dwight Howard. After missing three games following a procedure to remove a cyst from his left ankle, Howard told the Houston Chronicle that the ankle bothered him Thursday and that he planned to have it evaluated by a specialist.

Beverley was in the midst of a breakout season as the team's starting point guard, especially because of his defensive ability on the perimeter. His stats of 9.9 points and 2.7 assists per game don't show how vital he is to the Rockets' defense. His strong play in the second half of the season has been a big factor in Houston's 27-8 record since Jan. 1. The Rockets, with a 49-22 record, hold the fourth seed in the Western Conference playoff standings.

When dealing with a torn meniscus, there is often an option to repair or remove it. If the damaged cartilage is removed, the player can often return in weeks, but there is a risk of complications in the future. If the tear is repaired, the recovery time is much greater, but fewer long-term risks result. Chicago Bulls point guard Derrick Rose had his meniscus repaired in November and was declared out for the season.

The Rockets will promote Jeremy Lin back into the starting lineup in Beverley's place. Lin has started 25 games this season, most of them when Beverley was out with a broken hand in December and January. He's averaging 12.4 points and 4.2 assists in 29 minutes a game as the team's top sub.

Houston's depth at point guard -- the Rockets also have rookie Isaiah Canaan on the roster -- led to a deadline trade of veteran Aaron Brooks for backup wing Jordan Hamilton.