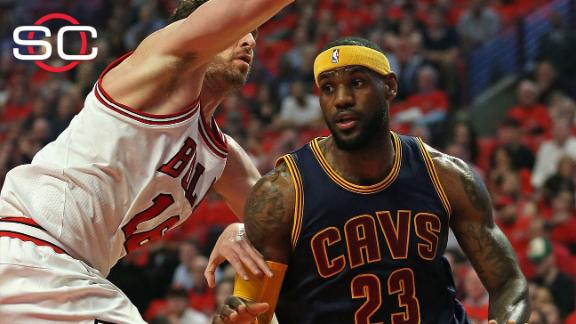 CHICAGO -- Chicago BullsforwardPau Gasol did not play in Game 4 of the Eastern Conference semifinals against the Cleveland Cavaliers because of a left hamstring injury, Bulls coach Tom Thibodeau announced before Sunday's game.

Gasol initially hurt the hamstring in Game 2 and tried to play through the injury in Game 3, but he was taken out in the second half after scoring just six points in 22 minutes. He had an MRI on Saturday that confirmed the strain, but Thibodeau did not reveal how bad the strain was.

Thibodeau said Gasol was not able to do anything during Sunday's walk-through and is unsure whether Gasol will be able to play in Game 5 on Tuesday night in Cleveland.

Veteran Taj Gibsonstarted Sunday in Gasol's place. The Cavs beat the Bulls 86-84 on a buzzer-beater by LeBron James.

Gasol is averaging 15.1 points and 9.9 rebounds per game in the playoffs.