Pau Gasol's status for Game 4 unknown due to strained hamstring 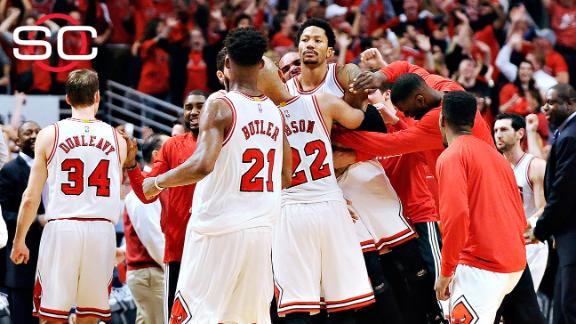 CHICAGO -- Chicago Bulls forward Pau Gasol has a strained left hamstring and his status for Sunday's Game 4 against the Cleveland Cavaliers is unclear.

Bulls head coach Tom Thibodeau said an MRI on Gasol's hamstring revealed a strain and that the Spanish big man was still sore.

"[He's] day to day," Thibodeau said. "He didn't do anything today. We just did some walkthrough stuff."

Thibodeau was non-committal as to whether Gasol would be able to play on Sunday or not.

Gasol said after Game 3 that he initially hurt the hamstring in Game 2 and was hoping he would be able to play through the injury, but he wasn't able to do that on Friday night. Gasol scored just six points in 22 minutes and had to leave the game in the second half.

Now the Bulls have to face the reality that he may have to miss at least one game in a series that they lead 2-1.

"We don't know the [extent] of his injury yet," Bulls forward Taj Gibson said. "I hope he'll play, I hope he'll be OK, but if not it's up to us to come together as a team. Like we've said, it's going to take everybody on our roster to get the job done. You never know when your number is going to be called. Just got to be ready."