Paul George ready to do whatever it takes in Game 6 vs. Raptors 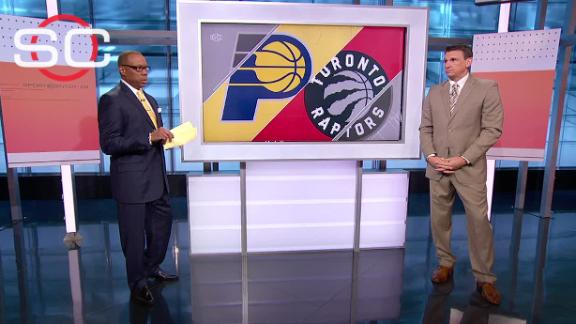 INDIANAPOLIS -- Pacersstar Paul George said he is willing to play 48 minutes in Friday night's Game 6 against the Toronto Raptors if needed.

"If that's the direction that the game is going, I'm all for it," George said after Thursday's practice. "Whatever we got to do to win, I'm doing it."

George scored 39 points, grabbed 8 rebounds and dished out 8 assists in 41 minutes during Game 5, but it wasn't enough, as the Raptors came back from a 17-point deficit to take a 3-2 series lead. George admitted Thursday that he's "still not over" the end of Game 5, in which the Pacers blew a 13-point, fourth-quarter lead.

According to ESPN Stats & Information, the Pacers were 0-for-10 from the field, had three turnovers and scored just one point during the 6 minutes, 55 seconds that George was out of the game. The Raptors were 7-for-14, scored 19 points and didn't turn over the ball during the same stretch.

Pacers coach Frank Vogel was noncommittal about George playing all 48 minutes, saying only that it could happen "if necessary."

Vogel acknowledged after Game 5 that George seemed a little tired at the end of the third quarter when the coach pulled him out of the game for a few minutes. He offered no doubts, at least outwardly, in the way he handled George's minutes.

"We handled it the right way," Vogel said.

George has not played all 48 minutes of a regulation game in his career. He averaged 41.1 minutes a game during the 2012-13 and 2013-14 postseasons. The five games in this series are the first postseason action he has had since a gruesome broken leg suffered while training with Team USA in advance of the 2014 World Cup of Basketball. George is averaging 37.8 minutes a game in this series heading into Game 6.

For his part, George feels confident he can play at a high level for an entire game.

George said that if he does play all 48 minutes Friday, the conversation about his playing time would happen during the game, not before it.

George was frustrated after Game 5 but said he didn't want to call out his teammates for failing to protect the large lead. He stood behind Vogel's decision again Thursday.

"Coach is getting a lot of criticism for taking me out," George said. "Both times he took me out we were in the driver's seat looking comfortable. Up 15 [to start the second quarter] and up 13 [to start the fourth] both times. We're supposed to do our job, maintain that lead, extend that lead. We didn't know the game was going to go that direction."

For his part, Vogel tried to turn the page as soon as the game ended. He maintained his stance after Thursday's practice.

"We got outplayed," Vogel said. "We got to understand that it's a 48-minute game, like we said the other night. We didn't give a game away because that would imply you have something and you don't earn a victory after 36 minutes. We got to play better in the fourth quarter, especially when you're up. They're going to change the game, different lineup, more pressure, more 3's, quicker shots. And you got to win the fourth quarter a lot of times differently than you won the rest of the game. So we learn our lesson from it and come back and win Game 6."