Paul Pierce to sign with Clippers for 3 years, $10.6 million 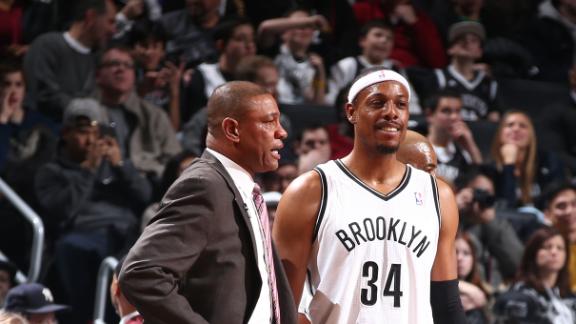 The Clippers only had their taxpayer minimum to offer him, and that was enough to lure him from the Washington Wizards, with whom he proved to be every bit the veteran leader they had hoped in the postseason.

The deal will reunite Pierce with coach Doc Rivers, with whom he won the 2008 NBA title while with the Boston Celtics.

Rivers coached Pierce for nine seasons in Boston, where the veteran forward spent the first 15 years of his career.

Pierce went to high school in the Los Angeles suburb of Inglewood -- and playing for Rivers again was apparently too strong to ignore.

And although Pierce -- who is entering his 18th NBA season -- said at one point last season that the 2015-16 campaign would be it, maybe that's no longer the case either.

Pierce has been on a series of one-year stints since, first Brooklyn, then Washington, and now he heads to the Clippers -- who went to the Western Conference semifinals this past season after ousting San Antonio in one of the league's most memorable opening-round matchups in recent memory.

The Clippers have a core that seems championship ready, and Pierce -- the No. 16 scorer in NBA history -- figures to only help them get closer to actually winning one.

He shot 52.4 percent from behind the arc during the playoffs and bumped his points per game average from 11.9 in the regular season to 14.6 for the postseason.

During Washington's second-round series against the Atlanta Hawks, Pierce was the Wizards' go-to player in the clutch. He hit a game-winning 3-pointer at the buzzer in Game 3, and had what would have been the game-tying shot in Game 6 waived off after replays showed it left his hand just after the buzzer sounded.

In the first-round series against the Toronto Raptors, Pierce relished playing the villain and added a distinct level of confidence to the Wizards' play en route to a sweep of the higher-seeded Raptors.

Following the team's playoff exit, the 37-year-old small forward had hedged whether or not he would return to the league for his 18th season.

"I don't even know if I am going to play basketball anymore. These seasons get harder and harder every year, every day," Pierce said. "Summers get even harder when you start getting back in shape. I'm 37 years old. I'm top two or three oldest in the league."

Pierce, the one-time NBA champion and veteran of three teams, was the eighth-oldest player in the NBA this past season.

The Wizards had made it clear they wanted Pierce back and expressed how much better they have become because of him.

"He's a great leader, great mentor," point guard John Wall said following the team's series-ending Game 6 loss to the Hawks. "Just seeing his competitive drive and how hard he works, being the first and last guy here, never making excuses, that is something we can use.

"Just to see his footwork, his competitive drive, how he talked junk, how he wanted to make the big shots, how he had so much confidence, he has built that in us."

Added Wizards owner Ted Leonsis on his personal blog in June: "Paul Pierce is a Hall of Fame player, and he brought so much to the Wizards this year -- on the court as well as off," "When people struggle to describe the 'It Factor,' all they need to do is look at Paul."

Information from ESPN's Larry Coon and ESPNNewYork.com's Ohm Youngmisuk and The Associated Press was used in this report.