Pete Rose's No. 14 retired by Reds 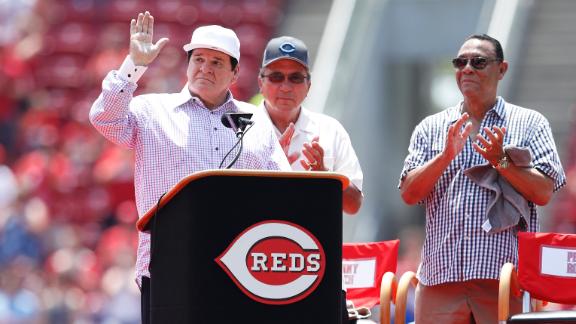 The Cincinnati Reds officially retired Pete Rose's No. 14 on Sunday in a pregame ceremony.

Big crowds filled Great American Ball Park for the three days of celebration, which had to be approved by Major League Baseball because of Rose's lifetime ban for betting on his team. The last-place Reds have played in front of small crowds for much of the season.

"It is our salute to that person whose impact transcends their lifetime and spares any future player the impossible task of living up to a legacy too large to fill," Reds CEO Bob Castellini said during the ceremony.

Pete Rose Jr. threw the ceremonial first pitch to his father, who stood behind home plate. The younger Rose is the only player to wear No. 14 for the Reds since his father's retirement.

Rose playfully asked Castellini if Pete Rose III can wear the No. 14 if he ever makes it to the majors.

The Reds stretched the celebration into an entire weekend, honoring their 1976 World Series championship team on Friday night and adding him to their Hall of Fame on Saturday.

Rose urged fans Sunday to keep supporting the team, which lost 98 games last season and is again last in the National League Central. The Reds lost the first three games of the series to the San Diego Padres, another last-place team.

"And who knows? It won't be long before [Castellini] is here again recognizing a guy who's in the dugout for tonight's game."

Rose was given a crystal glass sculpture depicting the moment after he got his 4,192nd hit and a painting illustrating his trademark headfirst slide.

Fans chanted Rose's name as he began to speak Sunday, prompting him to say, "You're not going to make me cry."

Rose acknowledged all the other Reds players who have their numbers retired, thanked the team and its hall of fame for honoring him this weekend, and called Cincinnati "the capital of the baseball world."

Rose's number is the 10th retired by baseball's first professional team, along with Jackie Robinson's No. 42, which is honored by Major League Baseball.