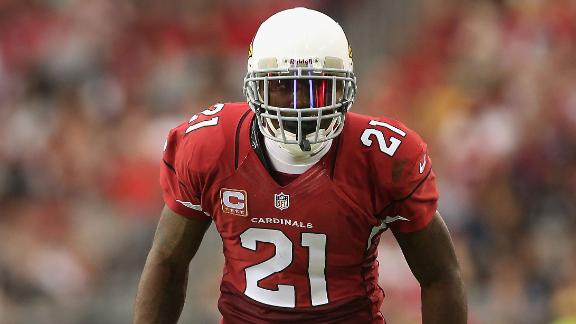 When asked on a Phoenix radio show Thursday about a May 13 tweet by Seahawks cornerback Richard Sherman that was indirectly targeted at Peterson, the Cardinals' three-time Pro Bowl cornerback didn't debate the stats. He just said Sherman couldn't handle playing in Arizona's defensive scheme.

"I believe if you put him in our system I don't think he'd be able to last, honestly," Peterson said on "The Bickley Show with Vince Marotta" on Arizona Sports 98.7 in Phoenix. "I actually do much more than he is."

A day after Peterson said he felt he was worth more than the $57.4 million extension Sherman signed May 12, the Seahawks star tweeted:

Want what I got? Get the stats I got! Least targeted. #opinionvsfact pic.twitter.com/f2juIjKm66

"I don't want to get into that debate as far as the stats that he has and things he has," Peterson said. "Obviously, his job is definitely much easier than mine. If you look at their scheme and look at our scheme, he's a Cover 3 corner. Period."

Peterson acknowledged that fans will likely only look at interceptions, and Sherman wins that category. He has 20 interceptions since 2011, compared to Peterson's 12.

"He's only covering space. He's not really covering a guy," Peterson said. "At the end of the day, he has great stats and he has great playmaking ability, not taking that away from him because he is a good corner.

"But as far as being a shutdown corner, man-to-man guy, in my eyes, I don't believe he's that."

Peterson, a two-time All-Pro -- once at punt returner and once at cornerback -- has played more roles for the Cardinals than Sherman has for the Seahawks. Since 2011, Peterson has been on the field for 520 more snaps than Sherman, including 128 punt returns, 44 offensive snaps and 18 kick returns. Peterson also has 151 solo tackles since 2011 to 138 by Sherman.

Who's more valuable to his team? The stats might help that debate.

On May 12, Peterson, who has two years left on his contract, said he believed he is worth more than Sherman. He added the two are friendly and text "here and there."

"I was happy for Richard. I thought he worked hard for it," Peterson told ESPN. "I believe some of the outbursts were definitely timed very, very well. But at the same time, he did what he needed to do to get paid."

Peterson Wants To Get Paid
Chris Mortensen discusses whether Patrick Peterson will get the contract he is looking for.