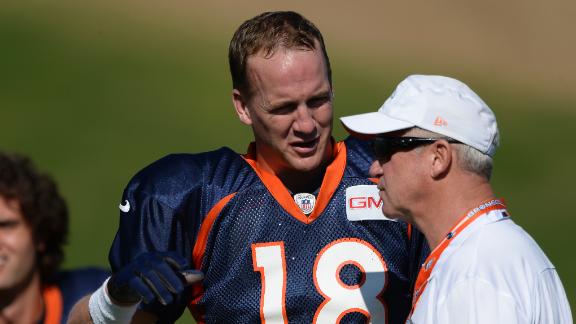 ESPN
By Jeff Legwold
ENGLEWOOD, Colo. -- A team that has publicly had its toughness questioned from this past February's 35-point Super Bowl loss got in touch with its angry side Tuesday. And the Denver Broncos' on-field skirmishes were not to everyone's liking.

"I don't like [fights], to tell you the truth,'' quarterback Peyton Manning said. "You don't do it in a game. If you do it in a game, it usually costs you something important, it costs you a drive, costs you field position. ... I'm into treating practice like a game. I'm not a fan of it.''

The Broncos, who are conducting training camp with no fans present at their practices because of construction at their team complex, have had a quiet camp thus far. The team has gone about its business with some minor pushing and shoving after plays.

But Tuesday morning's session was chippy from the start, with plenty of back-and-forth in the fully padded practice. When the team went to a run-game period, the practice crossed the line from chippy to downright nasty.

After two smaller post-play skirmishes, including one between defensive tackle Kevin Vickerson and backup center Will Montgomery, things boiled over on the fourth play of a four-play sequence, when all of the confrontations happened.

Guard Orlando Franklin and defensive tackles Derek Wolfe and Terrance Knighton were at the center of a scrum that included almost the entire team, with players running over from the other sideline to get into the fray. Franklin's helmet was ripped off in all of the shoving, and the coaches dispersed the group.

"It is a fine line. You want some chippiness; it is a combative game,'' Broncos coach John Fox said.

When the team finished the practice period several plays later, Fox gathered the players in the middle of the field and talked for several minutes. Following that, there were no more confrontations for the remainder of the practice.

Asked what he said to the team, Fox said it was "about keeping control of your emotions. It's something that's going to happen in games we're training for and trying to improve.''

Defensive coordinator Jack Del Rio spoke to the entire defense for several minutes after practice while Fox chatted with Franklin and left tackle Ryan Clady as they walked toward the weight room. The Broncos are scheduled to practice for three days with the Houston Texans next week.

Manning said he hoped the Broncos would not repeat Tuesday's confrontations again in the coming days.

"I know all the coaches are looking for tough guys on their team, but there's a difference between being tough and not being smart,'' Manning said. " ... It's a matter of staying disciplined, staying composed in intense situations.''