Peyton not focused on TD record 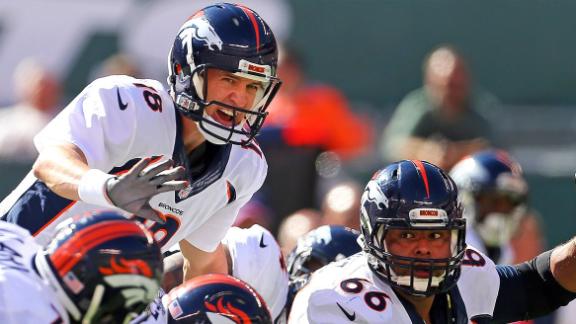 ENGLEWOOD, Colo. -- On the doorstep of the NFL's record for career touchdown passes, Denver Broncos quarterback Peyton Manning has stuck to the details, and his teammates have followed that lead and kept history out of the conversation.

Manning needs two touchdown passes to tie Brett Favre's record of 508 touchdown passes and three to set the record, and the Broncos say they want to keep their eyes on the San Francisco 49ers on Sunday night and not a brush with history.

"I think we've concentrated on important things; we've had two good wins coming off a bye week,'' Manning said after Wednesday's practice. " ... That's what I've concentrated on, kind of doing whatever it takes to win. I don't feel like it's been a distraction.''

The numbers say Manning has a quality shot to break the record against the 49ers' stingy defense. Manning has thrown at least three touchdown passes in four of the Broncos' five games this season, including this past Sunday against the New York Jets.

And of the quarterbacks in the top 10 in touchdown passes this season across the league, Manning is the only one who hasn't played six games. The Broncos had their bye week in Week 4 of the schedule.

As with a lot of things, while the rest of the Broncos know the record is approaching, they have taken their cues on the matter from Manning.

"It's not something we talk about as an offense ... we just keep playing football,'' tight end Julius Thomassaid. "But I can personally say ... and it just speaks to the work ethic and attention to detail he's had his entire career. We'll be extremely happy for him when it happens.''

"I don't think anybody in here is on record watch,'' said Broncos tight end Jacob Tamme, who also was Manning's teammate in Indianapolis. "It will be a real special moment when it happens, but it's not something we are in here talking about.''

Two weeks ago, against the Arizona Cardinals, Manning joined Favre as the only two players to reach 500 career touchdown passes. Manning finished the Broncos' win over the Cardinals with four scoring passes -- No. 500 went to Thomas -- to go with his three this past Sunday against the Jets.

Thomas, who also caught Manning's 51st scoring pass in 2013 when Manning went on to push the single-season record for touchdown passes to 55, was asked Wednesday whether he would keep No. 509 if he caught it.

"I didn't really think about it at all until people started asking about it,'' Tamme said. "But now that I'm standing here thinking about that, it would be really cool.''