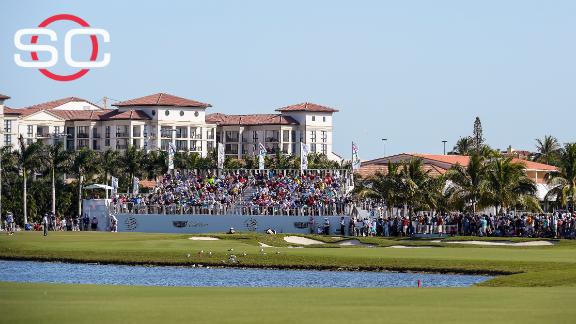 The PGA Tour announced Wednesday that the new event will be known as the WGC-Mexico Championship. It will be held March 2-5 next year, with a venue in mind but not yet announced.

The Tour has a seven-year agreement through 2023 with Group Salinas, a collection of companies based in Mexico City primarily involved in retail, television and telecommunications, to sponsor the event.

Trump Doral had been the site of a PGA Tour event since 1962.

"Some of the reaction revolves around the feeling that this is political exercise, and it is not that in any way, shape or form,'' PGA Tour commissioner Tim Finchem said during a news conference at the Memorial Tournament. "The decision here was based on the reality that we are not able to secure sponsorship for next year's WGC at Doral or for years out for that matter.

"At the same time, we had an opportunity to build what we think is going to be a spectacular event in an area that is strategically important to the growth of the sport and the activity of the PGA Tour that has been focused in South America and Central America for the last good number of years.''

The resort's owner, Donald Trump, said in an interview with Fox News on Tuesday night that the event was moving from his course. Finchem said he had a call with Trump to discuss the decision and that Trump's discussing it on Fox News hastened the move to officially announce it Wednesday.

"They're moving it to Mexico City, which, by the way, I hope they have kidnapping insurance," Trump added, perhaps alluding to Mexico's reported battle against a nationwide surge in abductions in recent years.

In a statement released Wednesday, Trump said: "It is a sad day for Miami, the United States and the game of golf, to have the PGA Tour consider moving the World Golf Championships, which has been hosted in Miami for the last 55 years, to Mexico."

Trump, the Republican presidential candidate who has numerous golf course interests, has pumped millions of dollars into a resort refurbishment since taking over Doral in 2012. Finchem praised Trump for those improvements to the golf course.

Cadillac did not renew its sponsorship of the World Golf Championship event, and the PGA Tour had been in the process of trying to find a replacement.

Finchem said the initial focus was to try to secure a sponsor for Doral, which has had a continuous event for 54 years. The hope is to bring another PGA Tour event back to the venue, he said.

"We ran out of time," Finchem said. "We have a contract for a notice requirement with the Trump organization. We have nine months now to build a new property at a new location. So we had to act.

"But it is a venue we've been at for half a century, so it will be a focal point of our efforts going forward to see what we will do.''

Trump's politically charged comments on the campaign trail long had been part of speculation concerning a possible move from Doral. In January, the PGA Tour pledged its commitment to the tournament and Miami but said it would review the future upon completion of the March event.

In 2013, the PGA Tour announced a 10-year contract extension with Trump National Doral through the 2023 event. But that deal was contingent upon title sponsorship, and with Cadillac's run over, the tournament's future was in question in Miami.

"I know everybody's talking about politics, but it's actually not that, in my view," Finchem said. "I think it's more Donald Trump is a brand, a big brand, and when you're asking a company to invest millions of dollars in branding a tournament and they're going to share that brand with the host, it's a difficult conversation.

"The difficulty there is more that and less the politics. The politics might have contributed some since he's been running, but it's more that, and he knows that. It's unfortunate we couldn't make it work right now, but our focus is going to come back [to Doral] with a solid property to make it work going forward."

The coincidence of the move from Trump's resort outside Miami to Mexico City was not lost on some of the players.

When he announced his candidacy last year, Trump said Mexico was sending its unwanted people to the United States, and that in many cases they were "criminals, drugs dealers, rapists.''

"It's quite ironic that we're going to Mexico after being at Doral," Rory McIlroy said. "We just jump over the wall."

Finchem said the event in Mexico City is expected to follow the Honda Classic in Palm Beach Gardens, Florida, and precede the Valspar Championship in Palm Harbor, Florida, meaning there would be an interruption in the Florida Swing. The Arnold Palmer Invitational in Orlando follows the Valspar event, and the tournaments have been played in that order since 2007.

Finchem acknowledged it is possible there will be a reworking of the schedule before 2018 to have the Mexico City tournament follow events on the West Coast and precede the three tournaments in Florida.