Philip Rivers has bulging disk in back 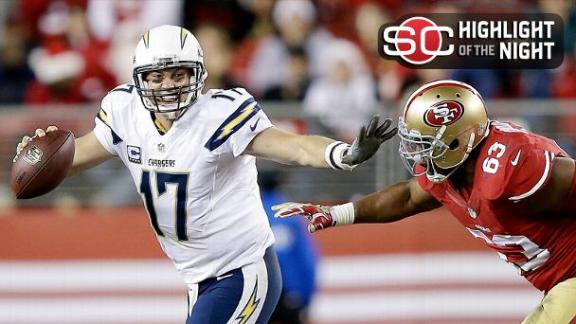 San Diego Chargers quarterback Philip Rivers' comeback performance Saturday night in the overtime victory at San Francisco against the 49ers was even grittier than it looked.

Team sources tell ESPN that Rivers is playing with a bulging disk in his lower back that doctors fear is on the brink of being herniated.

The disk caused Rivers to miss practice Wednesday for the first time since 2007 even though the injury began to bother him some three weeks ago.

Rivers finished 33-for-54 for 356 yards in Saturday's38-35 overtime victory that helped keep the Chargers' playoff hopes alive. Although he threw three interceptions, he threw four touchdown passes andconverted fourth-and-8 and fourth-and-10 on San Diego's final drive of the fourth quarter as the Chargers rallied to win after trailing by 21 points at halftime.

49ers Lose 21-Point Lead, Lose To Chargers
SportsCenter Highlight of the Night: Despite 355 rushing yards and three touchdowns from the 49ers, Philip Rivers and the Chargers came back from a 28-7 deficit to beat San Francisco 38-35 in overtime.