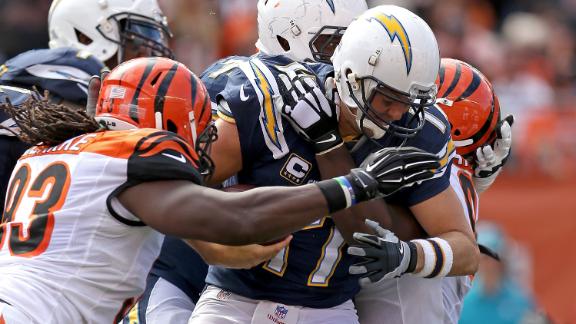 Rivers came into Sunday's contest against the Cincinnati Bengals tied with Fouts for 15th on the NFL's all-time list with 254.

He eclipsed Fouts with a 10-yard touchdown pass to Stevie Johnson with 10:34 left in the third quarter, moving into a tie for 14th on the NFL's career list with Sonny Jurgensen.

Rivers added a second touchdown in the fourth quarter but threw a game-ending interception in a 24-19 loss.

Fouts was in attendance, calling the game for the CBS TV broadcast.

Rivers set the record in his 150th career game for San Diego. Fouts played in 181 career games for the Chargers.

Rivers' streak of consecutive completed passes ended at 22 midway through the first quarter, when his throw to Johnson on an out route sailed high.

Rivers completed 20 straight passes to finish last week's win over the Detroit Lions. During that stretch he threw for 229 yards and two touchdowns.

Donovan McNabb holds the record for most consecutive completions with 24, accomplished over two games against the New York Giants (10) and Green Bay Packers (14) at the end of the 2004 season.