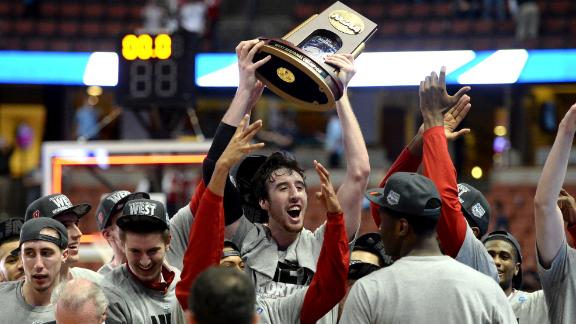 TUCSON, Ariz. -- Tucson police said Saturday night that they shot pepper spray at several hundred fans who took to the streets and threw beer bottles and firecrackers at officers after the University of Arizona basketball team's overtime loss in the NCAA tournament.

Fifteen people were arrested for offenses such as resisting arrest, disorderly conduct and unlawful assembly, Tucson police Sgt. Pete Dugan said. Of those, 14 were released, and one was sent to Pima County jail. He said those who advanced on officers were arrested.

No officers or fans were injured.

By late Saturday, the street was clear and the crowd was gone.

"The majority of the crowd did not respond to the dispersal order and began throwing beer bottles, beer cans and firecrackers at the officers," Dugan said. "Several of the firecrackers rolled underneath a patrol vehicle that was deployed with the Mobile Field Force Units."

Dugan said crowds leaving bars and restaurants near campus after the game filled University Boulevard and wouldn't leave despite urging through a PA system and social media declaring it an unlawful assembly.

Police brought in cruisers and a unit of officers with batons, helmets and face masks to block the street when people started tossing beer bottles, cans and firecrackers, hitting police vehicles and endangering officers.

Officers fired pepper spray, pepper canisters and pepper balls, which disperse into the air when they hit, Dugan said. No tear gas was used despite some reports.

A witness, David Kitaeff, told The Associated Press that the incident started innocently with people taking photos, but then "people got in cops' faces." He said fans were throwing drink cans at officers, whom he saw marching down University Boulevard.

Police said no officers were injured and the only damage reported was a street sign that had been knocked over.

Officials said the names of those arrested individuals will be given to the Dean of Students to determine if any of them are currently enrolled at the university.

Arizona lost 64-63 to Wisconsin in the West Region final Saturday in Anaheim, Calif.

Police Pepper Spray, Arrest Fans After Arizona Loss
Tucson police said Saturday night that they shot pepper spray at several hundred fans who took to the streets and threw beer bottles and firecrackers at officers after Arizona's overtime loss in the NCAA tournament.