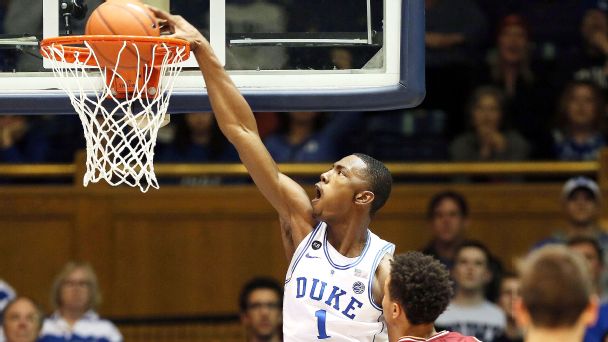 The odds worked in favor of the Boston Celtics at Tuesday night's NBA draft lottery, as the top seed in the Eastern Conference will also have the No. 1 pick in the 2017 NBA draft courtesy of a previous trade for the Nets' first-round pick. The Los Angeles Lakers, meanwhile, avoided losing their first-round pick via a conditional trade component and will select No. 2 overall.

While getting a top-three pick was a long shot for many of the lottery teams, those that select in the top half of the first round will still have an opportunity to find great value.

Using ESPN Analytics' NBA draft model, we looked at the top five players who currently rank higher by our evaluation than in Chad Ford's latest version of the Big Board, and identified the teams that should think about selecting those players. The five players below could be potential steals in a league that is increasingly relying on analytics in its evaluation of talent. For more detail on how ESPN Analytics' draft model works, see this explainer.

Isaac has the top projected statistical plus-minus (SPM) for his first five years in the NBA, according to our model, which gives him a 64 percent chance to play at the level of a bona fide NBA starter or better. Isaac has the third-best adjusted defensive rebounding percentage in this draft class and a 55 percent adjusted effective field goal percentage, which is as good as any other small forward in this draft class. His college stats are most similar to those of Otto Porter, who was selected No. 3 by the Washington Wizards in 2013 and was a key piece for a team that finished a win away from the Eastern Conference finals this season.

It is unlikely that Isaac will work his way into the top three, but at No. 4, the Phoenix Suns could get a top-quality player if Isaac is available.

Our data has shown guards to be more difficult to project than big men at the next level, as some guards are able to transfer their shooting to the NBA while others possess shooting flaws that aren't exposed until they play against bigger and faster defenses in the NBA. That said, the model gives Monk just a 25 percent chance of being a bust, which is the second-smallest figure in this draft for a guard after Lonzo Ball. Compared to the other top-60 players on Ford's Big Board, Monk is unique because he lacks any glaring weaknesses statistically, but the only statistic in which he really stands out is his having a low turnover percentage.

Ford has the Philadelphia 76ers taking Monk at No. 3 in his latest mock draft, and our model agrees that he is one of the three best players in the draft.

Markkanen is a 7-footer who has the highest adjusted percentage on 3-point and free throw attempts of any forward in this draft class. He doesn't have the best rebounding percentages compared to other big men in the class, but he has the outside game that is sought from bigs in the modern NBA. Markkanen may not have the upside of other talent but is the second-least likely to be a bust, according to our model -- his college stats compare favorably to those of 11-time all-star Chris Bosh.

Markkanen may not be a splashy pick at No. 5, but he could be a good fit there for a Sacramento Kings team that is trying to fill the void left by DeMarcus Cousins.

Although his minutes were limited at Duke as he recovered from a series of knee injuries, Giles was very efficient when he was on the court. He had an eFG percentage of 58 from the floor when adjusted for opponents' defensive strength, and he possesses the third-best adjusted offensive rebounding percentage in this draft class.

Injuries are the main concern for teams considering Giles, as his health brings added uncertainty that our model can't directly account for. But if the medical personnel of the teams drafting in the 6-10 range feel comfortable, Giles could be a steal.

North Carolina was well-known for relying on the offensive glass to create scoring opportunities -- more than their opponents did -- during the Tar Heels' run to the NCAA title. Bradley was the one most responsible for that dominance on the boards, as he had an adjusted offensive rebounding percentage of 19 -- by far the best of anyone in this draft class. The model gives Bradley only a 31 percent chance of playing as a starter or better in the NBA, but gives him a 78 percent chance of playing at least as well as a solid rotation player in the league.

While he may not have the upside of other players available in the top half of the draft, for teams such as the Detroit Pistons, Denver NuggetsandMiami Heat, Bradley could solidify the bench and help them get over the hump and reach the playoffs next year.