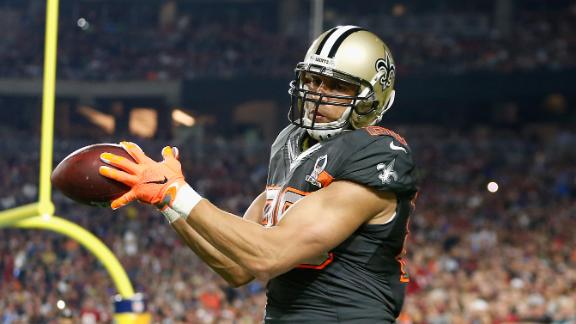 ESPN
By Josh Weinfuss
PHOENIX -- Most of the NFL players who'd been to a Pro Bowl in Hawaii missed much about it last week as the game was played in Arizona for the first time.

There were some things Hawaii offered that Arizona simply couldn't, including the ocean, the beach, the mai tais on the beach -- and the chicken wings.

They were served at the resorts housing the Pro Bowlers and their families in Hawaii and were the second best wings Cromartie said he's ever had -- even Cardinals cornerback Patrick Peterson said he missed the wings.

"We don't have that big resort," Cincinnati Bengals receiver A.J. Green said of the accommodations leading up to Sunday's game, which Team Irvin won 32-28 over Team Carter. "The whole place is nothing but families of players. It's different people walking around here, as well."

Home base for the Pro Bowl was the Arizona Biltmore, a resort that opened in 1929, located in Phoenix. It's luxurious and glamorous in an art deco, historic kind of way.

But it's not on the beach.

"I'd much rather definitely go to Hawaii and chill on the beach versus being here in the desert," Peterson said.

For the four Arizona Cardinals in the Pro Bowl, last week was a unique experience.

They didn't have to stay at the Biltmore, with Cromartie, Peterson and defensive end Calais Campbell opting to spend some of their nights at home while driving to Pro Bowl events.

They all were de facto tour guides, handing out dining, nightlife and golf course recommendations like they were concierges.

One of the major differences between Hawaii and Phoenix, Cromartie said, was having everything centrally located at the resort.

"Here at the hotel, you have registration here where you check in, you got to talk down the block basically to go to your locker room. That's the only difference really," Cromartie said. "And not having the beach. And not having the water."

"It was just a point of just having a chance to really be in an environment where only the players are, to be around and get to know all the guys and just to be around them," Cromartie said. "This experience is not really like that because you got some guys that's from here or may have houses here that may go home.

Green, a four-time Pro Bowler, said he'd head right to the beach when he arrived in Hawaii.

"That's the biggest thing," he said.

Indianapolis quarterback Andrew Luck, who played in his third Pro Bowl on Sunday, was diplomatic when speaking about the location.

"Obviously, it's not my decision to make where it is," Luck said. "I think guys appreciate the opportunity to go to Hawaii when it is there, but it is long flight and it is a tough place to get (to)."

Baltimore Ravens linebacker Elvis Dumervil doesn't mind the change of locations for the Pro Bowl because he enjoys traveling and spending time in new places. He also played in the Pro Bowl in 2010 in Miami.

Luck made a point, however, by talking about the distance from the mainland to Hawaii.

Because of the shorter plane rides, tickets were cheaper.

"This probably saved me a lot of money, too, because I'd have to get a lot more tickets, too, to Hawaii," said Arizona's Justin Bethel, who made his second Pro Bowl this year.

For the 36 first-time selections, their Pro Bowl experience didn't include Hawaii or beaches or the ocean. It included desert and mountains.

And Cromartie made sure they knew it.

"I was like, 'Man, too bad we're not sitting down by the pool, having Pro Bowl wings and mai tais cause it'll be y'alls treat because it's y'alls first time to the Pro Bowl,' " Cromartie joked.

But Pro Bowl rookies knew what they were missing.

"I wish I could be in Hawaii," Campbell said. "But Arizona is a great place."