Protesters in police custody death cause disturbance near Camden Yards 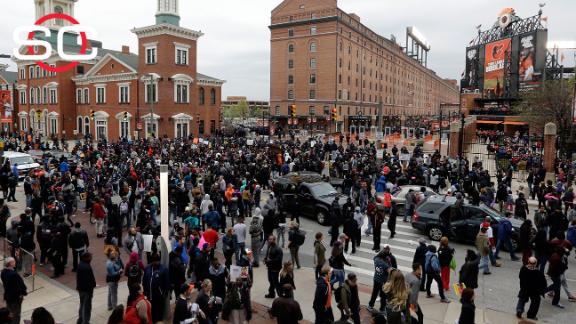 BALTIMORE -- Thousands of protesters took to the streets Saturday in the largest Freddie Gray rally yet, and after hours of peaceful demonstrations, pockets of protesters smashed out police car windows and storefronts.

Two people were hurt in the mayhem, and at least a dozen were arrested. The problems happened near Camden Yards, where the Baltimore Orioles game against the Boston Red Sox went on as scheduled, only fans were told toward the end of the game to stay in the stadium because of public safety worries. Before the game, demonstrators fought with fans at a bar.

A Baltimore police spokesman said an officer suffered minor injuries in the waning hours of the demonstrations near a police station where three dozen police officers in riot helmets and shields were lined up. The crowd was sparse, mostly people coming out of their homes, some throwing items, possibly rocks, at the officers.

At least five officers in all were injured.

The protesters blocked an intersection near the stadium for several hours and had a tense standoff with police Saturday night. The protesters were eventually cleared.

An announcement was made to the crowd of 36,757 at Camden Yards in the ninth inning asking fans to remain in the ballpark until further notice because of an "ongoing public safety issue." They were allowed to leave afterDavid Lough's walk-off home run gave the Orioles a 5-4 win in 10 innings.

Orioles manager Buck Showalter, who returned to Baltimore on Saturday from his father-in-law's funeral in Tennessee and arrived at Camden Yards midgame, said he and the team were aware of the situation outside the stadium.

"It's a challenging day to a lot of people -- a lot more challenging than a baseball game," Showalter said in his postgame news conference. "I mean, this is a game. And those are life issues. This kind of pales in comparison with what's going on in my life off the field and what's going on in our city. We have to continue to have confidence that we'll get through it, like we get through lots of things in this city.

"The [players] were kind of listening to what's going on in the clubhouse. I'm sure we'll have people talking about spending the night here tonight. I think they were aware of it. So many things that can take your attention from a baseball game, and let's face it, rightfully so. As important as we think this is, there are other things that are more important."

Gray died April 19 after suffering a fatal spinal injury while in police custody. Authorities have not explained how or when Gray's spine was injured. Video showed him being dragged into a police van, and police have said he rode in the wagon for about 30 minutes before paramedics were called. Police have said Gray should have received medical attention at the spot where he was arrested -- before he was put inside the van handcuffed and without a seat belt, a violation of the department's policy.

Six officers have been suspended with pay while local authorities and the U.S. Justice Department investigate the death.

In her first public comments since Gray's death, his twin sister, Fredericka Gray, appealed for calm as she appeared with the mayor at a news conference.

"My family wants to say, can you all please, please stop the violence?" Fredericka Gray said. "Freddie Gray would not want this. Freddie's father and mother did not want nobody ... violence does not get justice."

Baltimore Mayor Stephanie Rawlings-Blake said she was "profoundly disappointed'' that the protests over the death of Freddie Gray turned violent.

"Our city has a long history of peaceful demonstrations,'' Rawlings-Blake said at a news conference Saturday night. "Ninety-five percent or more of the people who came out sought to protest in that spirit. Unfortunately a small group of agitators turned what was otherwise a peaceful demonstration into a violent protest.''

There have been near-daily protests since Gray's death. On Saturday, a small group threw cans and plastic bottles in the direction of police officers. One protester broke out the window of a police cruiser, grabbed a police hat inside and wore it while standing on top of the cruiser with several other protesters.

At that point, scores of officer rushed into the area, stopped and formed a line, three officers deep. The protesters scattered but returned a few minutes later and began yelling, "What do we want? Justice! When do we want it? Now!''

From inside the stadium, fans watched the protesters gather.

Before the protest turned tense, demonstrators filled two city blocks and marched 2 miles to City Hall, where the crowd overtook the grassy plaza adjacent to the building.Fire officials estimate that roughly 1,200 people gathered at City Hall earlier in the day, and one person was transported to the hospital after falling down.

Tanya Peacher, a 36-year-old Baltimore resident, said she had never attended a protest in the city before, but watching a video of Gray's arrest motivated her.

Residents young and old, from Baltimore and beyond, voiced their anger at how the department and city officials are handling the investigation into Gray's death. At one point, the crowd paused for a moment of silence in front of Shock Trauma, the hospital where Gray died. The marchers then migrated to Camden Yards.

At a downtown intersection, a dozen marchers laid down in the street during an impromptu "die-in.''

Wearing a sign around his neck that said, "I am Freddie Gray,'' 33-year-old Dante Acree joined thousands outside City Hall. Acree said he came out to the protest because "it could have been one of my kids.''

Leonard Patterson, 56, said he drove from Manassas, Virginia, to be a part of the protest. Patterson said he decided to come after thinking about his college-aged daughter.

"I'm trying to do everything in my limbs, everything in my power, to make this a better world for her,'' said Patterson, holding up his black-and-white drawing of Freddie Gray. The drawing shows Gray being hoisted from a police van to heaven by two angels.

The Associated Press and ESPNBoston.com's Gordon Edes contributed to this report.