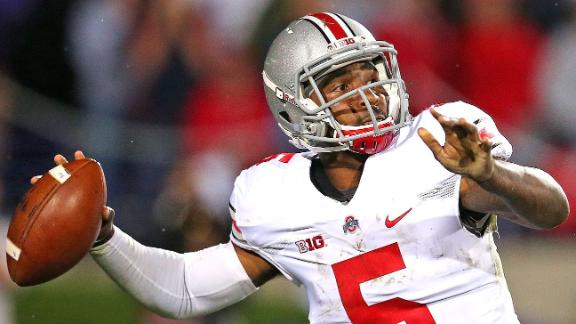 According to the source, Miller suffered a noncontact injury Monday and was taken off the field under medical supervision. He had declared himself 100 percent healthy earlier in the day.

Miller, who underwent minor surgery on the shoulder in February, will undergo an MRI on Tuesday, according to multiple reports.

Ohio State officials have declined to speak to the severity of the injury, which The Columbus Dispatch reported earlier Monday. The injury could put Miller's status for his senior season in question, according to the paper.

Ohio State barred media access to the team Tuesday, saying that interviews with assistant coaches and players have been canceled. The school also said that it would provide an update on Miller's status "once there is enough information to share."

Miller threw for 2,094 yards and 24 touchdowns and ran for 12 more scores in leading the Buckeyes to the Discover Orange Bowl this past season.

Ranked fifth in the preseason Associated Press poll released Sunday, Ohio State is expected to be in the national title conversation and Miller a Heisman Trophy candidate.

The Buckeyes open their season Aug. 30 against Navy in Baltimore. If Miller is unable to play in the opener, redshirt freshman J.T. Barrett likely would get the start, backed up by sophomore Cardale Jones.

But the fall-off in experience would be precipitous.

Miller has thrown 666 passes in his glittering three-year career. Barrett has never played in a game, and Jones has thrown only two passes.

Barrett, a 6-foot-1, 225-pounder out of Wichita Falls, Texas, was an acclaimed recruit who watched along with Jones last year as Miller took most of the snaps in the Buckeyes' 12-2 season.

When Miller was hurt for most of the San Diego State, California and Florida A&M games with a sprained knee, senior Kenny Guiton had big games while leading Ohio State to victories.

But Guiton graduated, and the Buckeyes might have to adapt on the fly to a new signal-caller.

Making that even more difficult is that Ohio State is without four of its five starting offensive linemen, its leading receiver (Corey Brown) and 1,500-yard rusher Carlos Hyde from last year's team.

Drive Through: Braxton Miller Latest
Cary Chow and Chris Low look at the impact Braxton Miller's injury could have on Ohio State this season.