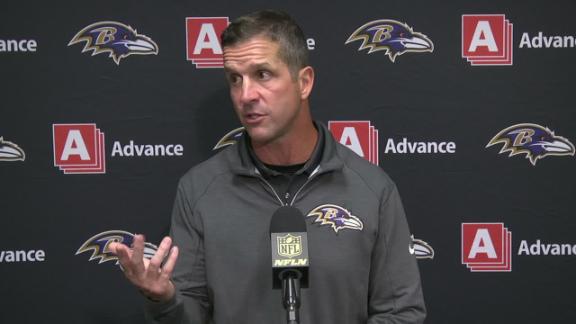 In a 26-18 loss to the Arizona Cardinals on Monday night, the Ravens (1-6) drove to the Cardinals 9-yard line, from which Joe Flacco was intercepted in the end zone with six seconds remaining. But Ravens coaches and players said the possession was affected by a lack of communication.

"We lost our phones, so [Flacco] couldn't hear Marc [Trestman], offensive coordinator," Harbaugh said. "I don't know why the phones were going out. They went out on that drive."

Baltimore marched 67 yards in the final two minutes, but Flacco acknowledged it was "too hectic out there." With the phones out, Trestman had to yell to Flacco from the sideline, and it took more time to get the right personnel grouping on the field.

"It was way too much communication going on for the amount of time we had left," Flacco said. "Guys were just confused -- and rightfully so."

Harbaugh said the Ravens were having problems with the communication system throughout the game, "but it got bad on the final drive."

The NFL will typically review any reported issues with communications systems on the sideline, but on-site representatives weren't alerted to any problems by the Ravens on Monday night.

Coach-to-quarterback communication issues began as a hot topic in Week 1, whenPittsburgh Steelers coach Mike Tomlin expressed frustration after a narrow loss to the New England Patriots in which his team's headsets received the Patriots' radio broadcast.

The Ravens' complaint was the second of its kind in Week 7. TheBuffalo Billshadtechnical issues in their 34-31 loss to the Jacksonville Jaguarson Sunday in London. Frustrated Bills coach Rex Ryan called the equipment outage "unacceptable" after the game.

"I don't get it," Ryan said. "I don't understand it. But this one was absolutely miserable."

This was just one of the difficulties the Ravens faced Monday. On the opening drive, guard John Urschel was flagged for illegal formation after catching a 6-yard pass in the red zone, even though replays showed he signaled to referee Ronald Torbert. Harbaugh said the referee told him he didn't see it.

"It's self-explanatory," Harbaugh said. "John did everything he was supposed to do in that situation, just as he's coached."

Harbaugh was also upset about Chris Johnson's 62-yard run in the third quarter. The Cardinals running back was wrapped up by nose tackle Brandon Williams before Johnson got up and ran to the Ravens' 8-yard line.

"Forward progress was stopped," Harbaugh said. "If you hit him in that situation, you're going to [be] fined and penalized."