Raiders draft Amari Cooper at No. 4 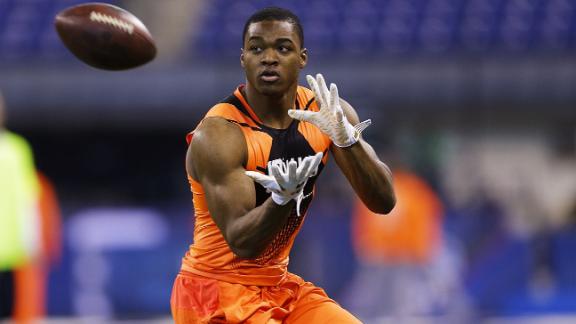 After swinging and missing in their attempts to land a free-agent wide receiver this offseason, the Oakland Raiders selected dynamic Alabama wideoutAmari Cooperwith the No. 4 overall pick of the draft Thursday night.

The Raiders were expected to take either USC defensive linemanLeonard Williams(who went at No. 6 to theNew York Jets) or Cooper, but with both available the offense won out.

The Raiders missed out on prized free agents Randall Cobb and Jeremy Maclin in their quest to give promising quarterback Derek Carr a legitimate No. 1 receiver and improve one of the most anemic offenses in the NFL last season a boost.

Cooper is considered one of the most complete receivers to come out of college in recent years and figures to instantly become Carr's top option in the passing game. His polish was a key for Oakland's brass in making the decision to go with Cooper over Williams.

"For a guy who hasn't played in the NFL, it's unusual when words like 'polished' are thrown out but that's what you see," new Oakland coach Jack Del Rio said.

Cooper led the nation with 124 catches last season in the tough SEC and ranked second with 1,727 yards receiving and 16 touchdown catches. In three years with the Crimson Tide, Cooper had 228 catches for 3,463 yards and 31 touchdowns. Del Rio said Cooper's production at Alabama was vital.

"I think it was a big part of the process, going through and looking at all the tape. Obviously the scouts have been on this player for a long time," Del Rio said. "He's had a very productive college career and coaches loved him, scouts loved him. It's good when you get a guy that there's a lot of respect for his body of work."

Cooper is just the third receiver taken by the Raiders in the top 10 of the draft since 1967, and Oakland hopes he will turn out as well as Tim Brown did back in 1988.

Brown is the last receiver drafted by the Raiders to gain at least 1,000 yards receiving in a single season. In fact, the Raiders haven't had any receiver reach that mark since Randy Moss in 2005, tied with Jacksonville for the longest current drought in the league.

"[Cooper] was on our board high from the start. It didn't matter about the position; it was about the player," said Oakland general manager Reggie McKenzie, who did not have a pre-draft visit with Cooper but did meet with him at the NFL combine in February. "We thought we had a chance to get a really good player and we were excited he was there."

Oakland had done little to address the receiver position this offseason with former San Francisco wideout Michael Crabtree the only notable addition. Now with Cooper on board and the return of Rod Streater from a season-ending injury, Carr should have a lot more options to pass to this season.

Carr played well as a rookie and showed signs of finally ending the revolving door at quarterback in Oakland. But he averaged a league-low 5.46 yards per attempt as he struggled to get the ball down field.

While Cooper is smaller than most elite receivers at 6-foot-1, he is considered an expert route runner and should be ready to step in and contribute immediately in the NFL.

After years of lackluster drafts, the Raiders finally started building their foundation for ending a 12-year run without a playoff berth or winning record.

Linebacker Khalil Mack stepped in as the fifth overall pick last year and immediately became one of the top players in the league at his position, proving capable of stopping the run and rushing the passer.

Third-round guard Gabe Jackson stepped into the starting lineup right away and played well as a rookie. Defensive tackle Justin Ellis and cornerback T.J. Carrie also were contributors as rookies.

This marks the first time McKenzie has taken an offensive player in the first round, having drafted Mack last year and cornerback D.J. Hayden in 2013.

For Cooper, he simply wants to come in and make his presence felt. He said the key for him as a rookie will be consistency. From the look at his collegiate numbers, the Raiders may not have much to worry about.