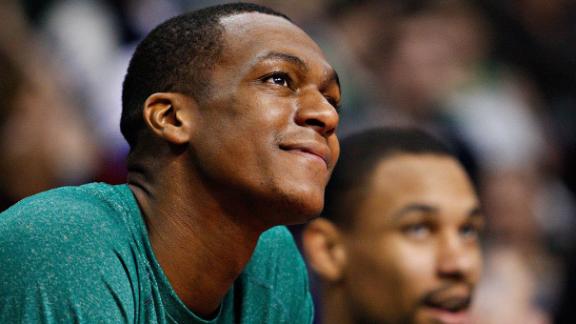 Boston Celtics point guard Rajon Rondo had surgery to repair a broken left hand and will miss the start of the regular season, the team announced Friday night.

The Celtics said Rondo underwent a surgical fixation of a left metacarpal fracture Friday morning at New England Baptist Hospital after injuring himself in a fall at his home Thursday evening. A source told ESPN's Jeff Goodman that Rondo told the team he slipped in the shower.

Rondo is expected to miss six to eight weeks, leaving the Celtics without their starting point guard for the beginning of the season. First-round pick Marcus Smart and Phil Pressey, who started 11 games as a rookie last season, are the top backup ball handlers currently on Boston's roster.

The injury is the latest headline surrounding Boston's captain.

On Tuesday, Celtics decision-makers, including owner Wyc Grousbeck, made clear again that they desire to keep Rondo long term. Grousbeck had raised some eyebrows earlier in the week when he told a television station that Rondo is "super stubborn" and questioned how coachable the All-Star point guard is.

"It's my goal to keep Rondo here," Grousbeck said. "I think we all want that. And I actually honestly think -- he should speak for himself -- I think Rajon wants to stay or would be very happy to stay. And we'll see how this season goes and how the negotiations go, but he's proud to be a Celtic. I know that. He's proud to wear that [2008 title] ring and he deserved it."

Celtics president of basketball operations Danny Ainge was downright exasperated when asked yet again this week about Rondo's future in Boston.

"Are you seriously asking me that again? Yes, we expect Rajon to be in Boston for the long term," Ainge said. "Does that need to be asked any more by anybody ever again?"

Rondo has missed 95 games the past two seasons, most the result of an ACL tear in January 2013. Team officials raved about Rondo's physical shape this offseason and often repeated that they believe he is poised for the best season of his career.

Rondo is set to become an unrestricted free agent after the 2014-15 season.