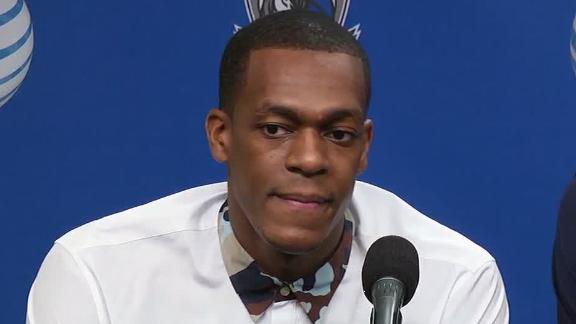 DALLAS -- The opportunity to play for a contender again has Rajon Rondo feeling revitalized after leaving a rebuilding franchise in the Boston Celtics.

"There's one goal that you have in mind, and I'm dying to get another ring again," Rondo said in his introductory news conference after joining the Dallas Mavericks in a blockbuster trade. "I want another parade."

Rondo played in two NBA Finals and won one championship during his eight-plus seasons in Boston. But the Celtics have been rebuilding since trading Kevin Garnett and Paul Pierce in the summer of 2013, going 25-57 last season and getting off to a 10-14 start this season.

Rondo attempted to approach the situation with professionalism, but the Mavs anticipate getting a much more motivated version of the four-time All-Star point guard, who says he physically feels "closer to where I used to be, if not better" after battling back from a torn ACL in his right knee suffered in January 2013.

"It was very challenging these last couple years," Rondo said. "I've been fortunate enough to play for future Hall of Famers and great teams and a great coach in Doc Rivers. And to get back to that situation and be able to play with future Hall of Famers and a great coach and a team that's ready to contend for a title, I'm fired up. I'm ready to go."

Mavs owner Mark Cuban made it clear that the team fully intends to re-sign Rondo, whose contract expires after this season, to a long-term deal this summer.

"We're past the days of rent-a-player," Cuban said, calling Rondo the definition of a franchise cornerstone. "We want him to be here for a long time and we want to earn his desire to stay here. We have to convince him that he wants to be here because we know we'll want him. We're going to do everything possible to keep him here forever."

Rondo's response: "I'm definitely excited and optimistic about the situation here. ... The future seems bright, and I'm just looking forward to winning a championship as fast as possible, and hopefully we can keep this team together."

Rondo arrived in Dallas after Friday's practice and was officially introduced at a news conference Friday night after passing his physical. He is expected to play Saturday night when Dallas hosts the San Antonio Spurs.

The Mavs are excited about their potential after adding a point guard they believe ranks among the elite at the position.

"Any time you have a chance to grab a top point guard in this league, you got to go for it," 12-time All-Star power forward Dirk Nowitzki said. "I think he's a competitor, a warrior. He plays hurt. He's a winner, so he brings a lot of great things."

The Mavs entered Friday 19-8 and in sixth place in the West, but they are 0-5 against incumbent playoff teams from the conference. The Dallas decision-makers made the deal because they believed the Mavs needed a major upgrade at point guard to contend in a conference that features several dominant players at the position.

Rondo's track record as a proven playoff performer -- his postseason statistics (14.5 points, 9.2 assists, 6.0 rebounds, 2.0 steals per game) are better across the board than his career averages -- is particularly appealing to the Mavs.

"I think he's showed in his career that he's a fierce, fierce competitor," said Nowitzki, who joins center Tyson Chandler and reserve guard J.J. Barea as current members of the Mavs who were part of their 2011 title team. "In the West, that position is as loaded as it gets, so he's going to have his hands full every night, and I think he's going to look forward to that.

"As we've seen throughout his career, when the competition gets higher, he raises his level and he's at his best in playoff and big-time games. That's exactly what you want. On a team that has aspirations to go high and play deep in the playoffs, you need a guy who gets better as it gets later in the year."

The Mavs need Rondo to have an immediate and significant impact as a defender and a rebounder. Those are the two biggest problem areas for Dallas, which ranks 20th in defensive efficiency and 29th in defensive rebounding rate.

Rondo made four consecutive all-defensive teams, although his last selection was in 2011-12. He leads all NBA guards in rebounding this season with 7.5 per game.

Help also could be on the way in the form of veteran free-agent center Jermaine O'Neal, who sources say is "highly intrigued" by the idea of joining the Mavericks with Rondo in the fold.

"Of course he's known for his defense and he'll bring that intensity," Chandler said of Rondo. "He'll shake some things up for us, which will be good. We're going to need it, especially in the Western Conference, the type of guards that we face on a nightly basis."

The Mavs hope that Rondo, who excels in transition, can help them push the pace and run more often. They acknowledge that they will need to figure out on the fly how to best fit him into the half-court offense.

"It's something I look forward to seeing how it's going to work," Nowitzki said. "With Monta being a ball handler a lot for us and Rondo's going to need the ball some in his hands, we're just going to put the ball in the playmakers' hands. You can never have enough playmakers off the dribble in this league, guys that can break down their guys and get in the lane. You can never have enough of those guys.

"So we'll just have to wait and see. We're not going to completely reinvent an offense. We're going to keep some of the stuff we're doing, but we got to tweak some stuff here and there for him."

The spacing of the Mavs offense will be affected by Rondo joining a starting lineup featuring Ellis, small forward Chandler Parsons, Nowitzki and Chandler. Rondo shoots 25 percent from 3-point range, so opponents don't have to respect him as a perimeter threat.

"You make a major trade, the dynamics are going to change, but I view Rondo as an extremely resourceful guy with a lot of ability," coach Rick Carlisle said.

"He's a guy that loves winning. We'll figure it out. I'd rather be charged with the task of figuring it out with guys of that competitiveness and ability level."

Information from ESPN.com's Marc Stein was used in this report.

Rondo Introduced In Dallas
Rajon Rondo discusses joining the Dallas Mavericks and what he will bring to the team.

Cuban On The Addition Of Rondo
Mark Cuban stops by SportsCenter to discuss the Mavericks' trade for Rajon Rondo.