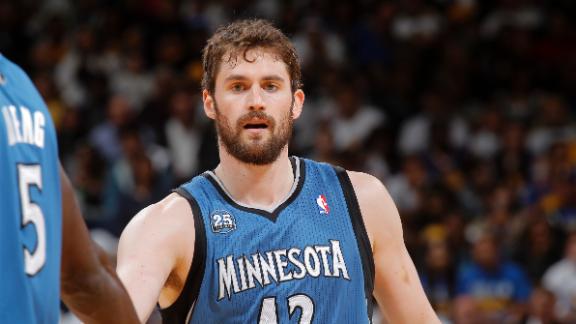 WALTHAM, Mass. -- Celtics point guard Rajon Rondo said he didn't put a hard sell on Kevin Love when the two NBA superstars crossed paths Sunday at Fenway Park, but he acknowledged that the Timberwolves forward is the sort of player who could help restore Boston to contender status.

Rondo, meeting with reporters Monday at the Celtics' training facility after watching the team work out 12 draft prospects, said his meeting with Love was brief and he held off on making a sales pitch on why Love should be in green.

"No, the only pitch that was thrown I think was [Boston Red Sox pitcher] Jon Lester, he threw out a couple pitches," Rondo joked. "I didn't pitch anything. I just told [Love] to enjoy his time here."

Love caused a stir among Celtics fans this weekend by making an unannounced trip to Boston, where he fraternized with some of the city's biggest sports stars.

That culminated Sunday, when a fan named W.B. Hames tweeted a photo of Rondo and Love exchanging pleasantries outside Fenway's EMC Club:

- Big Dub (@BigDub74) June 1, 2014Rondo had fielded questions about his offseason for less than a minute Monday before the conversation swung to Love, causing the point guard to quip, "You get right to it, huh?"

Rondo playfully added: "I talked to Kevin for about 39 seconds. It wasn't too long. We didn't talk a lot."

"Did it make TMZ? It's all over the web?" Rondo asked. "We do work together, we play against each other, we compete.

Rondo had been watching Sunday's game from the Green Monster seats above Fenway's famed left-field wall when some other fans alerted him that Love was sitting in the EMC suites. Hames was sitting with his family near the EMC's outside bar when he spotted Rondo walking across the concourse with his family.

Love is expected to opt out of the final year of his contract next summer and would be an unrestricted free agent. If the Timberwolves are worried about losing him without compensation, they could be enticed to trade him before then. Timberwolves president of basketball operations Flip Saunders, speaking Sunday after the team's draft workouts, said Minnesota expects Love back with the team next season.

Boston, with an arsenal of assets including as many as 10 first-round picks over the next five drafts, has the chips to make a run at Love if he became available.

Rondo was asked if Love could help a team like the Celtics.

"I think we'd be a lot better if you add a guy like Kevin," Rondo said. "He's a range-shooting 4, he's going to help on the glass -- obviously we haven't been the best on the glass the past couple years. But he'll do a better job in that aspect.

"But this is all speculation. Nothing is happening, nothing is set in stone. So we could talk about Kevin all day, or we could mention Carmelo [Anthony's] name. Nothing's happened. We have a couple [weeks] left before the draft, things might shake up around that time, you never know. It's a long summer until the beginning of training camp."

Rondo spent much of his 9½ -minute chat with reporters fielding questions on Love, including one asking just how talented Love is.

"I don't need to say how good he is," Rondo said. "The world sees it every night, or sees the stats every night. He puts up great numbers. But I think he wants to win now."

Reflecting on Boston's situation coming off a 57-loss rebuilding season, Rondo said, "I trust a lot in [Celtics president of basketball operations] Danny [Ainge]. He's turned this thing around before. I have faith in him. I believe in Danny. I think we do need another big-time player. But that's all his job. He's working on that now and I completely have faith in him."

Rondo, who also is expected to be an unrestricted free agent next summer, was asked if it's important for him that the Celtics to take a step forward before he reaches the open market.

"At the end of the day, I want to win. I want to win now," Rondo said. "And I'm sure Danny will have the guys in here that we'll be able to compete for a title. I don't just want to make the playoffs or get to the first or second round. When I compete, or when I make it to the playoffs, I expect to win every time."

But Rondo reaffirmed that he likes it in Boston.

"I don't like change, really," he said. "I'm pretty comfortable. I have a beautiful home here. I love it here. I have a great neighbor, the best neighbor in the world. I don't want to leave. It's just part of the process that I'll talk about once the season is over.

"As of now, I'm a Celtic, and I've been training here, and the staff has been doing pretty good as far as my rehab and working with [strength and conditioning coach Bryan] Doo a lot, and [team trainer] Ed Lacerte every day. This is home to me as of now."