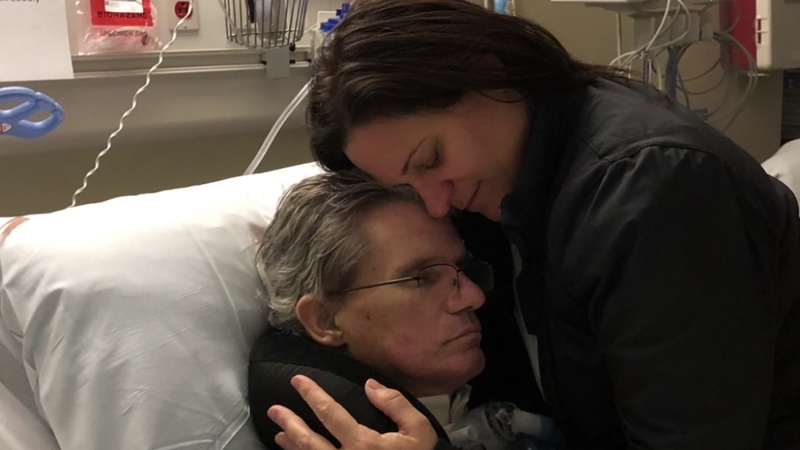 RALEIGH (WTVD) -- For the Collum siblings, sports is life.

"It's always on the TV it's always a conversation," said 23-year-old, Cassie Collum. "Every day someone has practice or a game."

"It was just always an important part of our lives," said Cassie's mother, Reneé. "Kids get home from school he'd get home from work and there was never a day that they were not tossing a ball."

For 20 years her husband, Mike, wasn't just "dad," but he was "coach" as well. He coached the kids in soccer, football, baseball and whatever they wanted to play.

Now, roles are reversed. It's the kids who are rooting for their dad.

In February, Mike was diagnosed with a recurrence of squamous cell nasopharyngeal carcinoma. He battled and won his first go around with the rare form of cancer 20 years ago, but it came back.

The doctors originally told Mike and his wife there was nothing they could do.

When the two of them came home to tell the kids the news, Cassie wouldn't accept no for an answer.

The nurse spent hours on the computer researching for the nasopharyngeal carcinoma doctors. She found one in New York who she emailed detailing her situation.

The doctor responded right away and allowed Mike to travel to New York, where he received treatment for the next four months.

When Mike returned back to Raleigh, his family thought they were through the hard part, but unfortunately for them, they were wrong.

He later came back home, but after two days he suffered a stroke, which left him with paralysis along the left side of his body and the right side of his face.

"She's my eyes and ears," Reneé read off the whiteboard. Mike writes on this to communicate. "I couldn't do it without her."

"And you will never have to," Reneé responded.

"He's strong and we know that he can do it," Cassie said. "That's why we put this on the shirts."

Mike's college football number was 27, which inspired the motto "27 Strong."

"It represents what we are going through as a family," said Jax, the youngest son.

The front of the shirts say "27 Strong," with a ribbon, and on the back, they say, "God gives his hardest battles to his strongest soldiers."

The community has even joined into the motto, wearing bracelets and shirts saying 27 Strong. One of the son's baseball teams came over to decorate the house for Christmas.

"It's crazy," said Dean Collum, the son whose team came to decorate. "You never think a baseball team would do all of this and it's awesome, best friends."

"It's part of the ball game kind of," said Reneé. "That's how we look at it. We can't control the things that are happening so we will just deal with it as they come. We're not going to give up. We're going to fight as hard as we can, right?"

Mike responded, raising his right fist into the air.