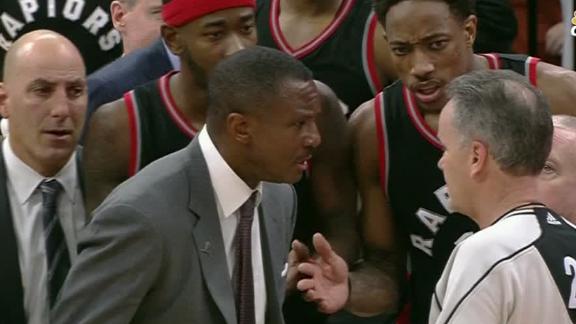 The Toronto Raptors have officially filed a protest with the league office to challenge the controversial ending of their loss Sunday night at Sacramento.

The Raptors, despite their seemingly remote hopes of a ruling in their favor, formally lodged their protest Tuesday night and will have five business days to present evidence to the NBA, after which the league will have five days to make a ruling.

The Raptors went ahead with the protest, at a cost of $10,000, even after the league office released a statement Tuesday reiterating that the ruling Sunday night made by the league's replay center in Secaucus, New Jersey, was the correct call.

"They're in contact with the league office and they will decide what direction to go into with that," Raptors coach Dwane Casey said Wednesday before his team faced the Houston Rockets. "I know I've gotten a lot of calls from coaches around the league."

Following a timeout with 2.4 seconds to go in regulation and the Raptors trailing by three points at the Kings' new Golden 1 Center, Toronto's Terrence Ross took control of a pass deflected by Sacramento's DeMarcus Cousins, took two dribbles and sank a 33-footer that appeared to force overtime until a replay review determined that the elapsed play took 2.5 seconds, ruling out Ross' shot.

"When Terrence caught the ball near half court, he knew he only had a couple of seconds to shoot the ball before time expired, but he also knew he had a clock above the backboard to glance up at as time winded down," Raptors president Masai Ujiri told the Toronto Star. "Unfortunately, the clock he needed to look at was in New Jersey."

In his statement Tuesday, NBA president of league operations Byron Spruell said: "After review at the league office, we have concluded that the end of the game was officiated correctly by NBA rules. We reviewed all aspects of the final 27.4 seconds and below is a summary of our evaluation.

"Toronto inbounded the ball with 2.4 seconds remaining in the game, and the clock did not start when the pass was deflected by Sacramento's DeMarcus Cousins. Per the NBA's precision timing system, the clock can be started by either the referees or the clock operator. The referees noticed the clock malfunction immediately which triggered a replay review under rule 13.1.a.5, which states that a review must occur if 'a play concludes (i) with no time remaining on the clock (0:00) at the end of any period or (ii) at a point when the game officials believe that actual time may have expired in any period; and the officials are reasonably certain that the game clock malfunctioned during the play.'

Spruell's statement was the second from the league office since Sunday night that the referees on the floor and the officials in charge of the replay review made the right calls. The fact that there has only been one successful protest in the NBA over the last 33 years, dating to the 1982-83 season, would appear to further dampen the Raptors' hopes.

In the event that the Raptors do manage to change the league's mind, it's unclear when the final 2.4 seconds of the game could be replayed, since Toronto and Sacramento have already played twice this month, thus completing the teams' season series.