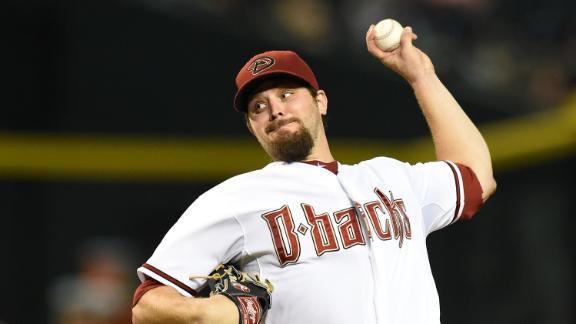 SAN DIEGO -- With the promise of bigger moves to come, the Boston Red Sox took the first step toward improving their 2015 rotation by acquiring left-hander Wade Miley from the Arizona Diamondbacks for pitchers Rubby De La Rosa and Allen Webster and a minor-leaguer yet to be identified, according to a major-league source.

Miley probably slots as a No. 3 starter between right-handers Clay Buchholz and Joe Kelly. The 28-year-old native of Hammond, Louisiana, has pitched no fewer than 194 2/3 innings since being installed in Arizona's rotation in 2012, eclipsing 200 innings in each of the last two seasons. Earlier in the day, Red Sox manager John Farrell said the team was placing a premium on acquiring durable starters capable of throwing 200 innings in the season.

Miley is not a hard thrower -- his fastball sits at 91 miles per hour -- and threw his slider last season much more (25.8 percent) than he did in his first two seasons in the rotation. His effectiveness is a product of his control -- although his numbers have risen from 1.71 walks per nine innings in 2012 to 3.35 walks last season -- and an ability to induce ground balls (1.81 ground-ball to fly-ball ratio).

His earned run average also has climbed in each of his first three seasons, to 4.34 last season, when he went 8-12, although his fielding independent percentage remained the same (3.98) in each of the last two seasons. His strikeout rate also climbed to a career-best 8.2 strikeouts per nine innings.

The acquisition of Miley comes the day after the Red Sox lost ace Jon Lester to the Chicago Cubs, which may lend itself to unfavorable comparisons. But Miley, while giving the Red Sox a lefty it was lacking in their rotation, should not be viewed in any way as a "replacement" for Lester. But with Buchholz the only pitcher currently on the roster who threw more than 100 innings last season, the Red Sox have prioritized durability.

News of the deal was first reported by Fox Sports.

Miley is arbitration eligible in 2015 and is projected to receive $4.3 million in arbitration this winter. He is under team control for the next three seasons, eligible for free agency after the 2017 season.

De La Rosa and Webster are the pitchers who came to the Red Sox in the 2012 megadeal with the Dodgers in which they sent Carl Crawford, Adrian Gonzalez, Josh Beckett and Nick Punto to Los Angeles in an enormous salary dump.