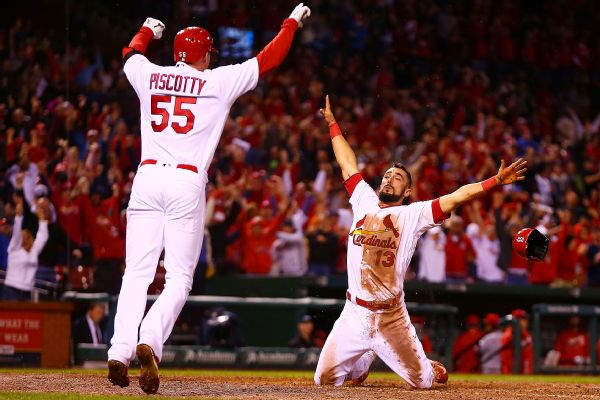 ST. LOUIS -- A controversial 4-3 Cardinalswin could prove critical in the NL postseason race after umpires ruled that the Reds didn't declare their intention to challenge a call quickly enough at the conclusion of Thursday night's game.

Yadier Molina doubled to left field with two outs and Matt Carpenter at first base in the bottom of the ninth inning at Busch Stadium. The ball caromed off an advertisement for the Missouri Lottery beyond the wall, and Carpenter raced home with the winning run.

However, the ball should have been ruled dead, forcing Carpenter to return to third. Cincinnati manager Bryan Price followed the umpires off the field and spoke with them in the tunnel, but according to the crew chief, the Reds' call to review the play was too late and the winning run stood.

"In this situation, Bryan Price did not come up on the top step (of the dugout),"crew chief Bill Miller told a pool reporter. "We stayed there. I waited for my partners to come off the field. I looked into the dugout, the Cincinnati dugout and Bryan Price made no eye contact with me whatsoever and then, after 30 seconds, he finally realized. Somebody must have told him what had happened and we were walking off the field."

Miller said none of the four umpires had an inkling the ball hit the sign, or they would have reviewed it themselves.

Teams are supposed to demonstrate their intent to review a play within 10 seconds and make up their mind within 30 seconds, but on plays that end the game, that decision must be "immediate," according to Replay Review Rule II D-3.

As the Cardinals mobbed Molina between first and second base, several Reds players milled about on the field as if awaiting a replay review.

Cardinals manager Mike Matheny, whose team trails the Giants by a half-game for the final wild-card spot pending the late game in San Francisco, acknowledged that the ground rules at Busch Stadium made that a dead ball.

The Cardinals didn't stick around long to see if there would be a review.

"They celebrated on the field and there's no reason to hang around," Matheny said.

Carpenter was about halfway between second and third base when the ball collided with the padded sign, so he would have been ordered back to third had umpires realized it was a dead ball.

"When the ball's hit I'm running as hard as I can. I never looked or saw where it was," Carpenter said. "I'm picking up the third-base coach and got the wave, and that's a fun way to win a game."