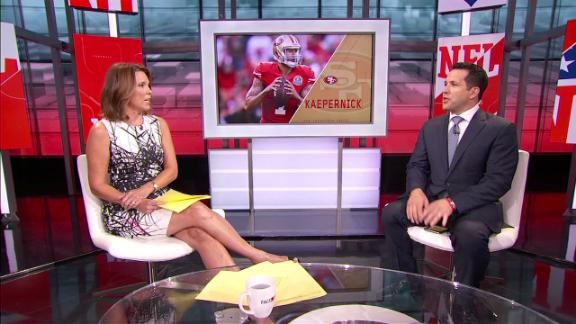 Dr. Peter Millett, who performed Kaepernick's shoulder surgery, gave the quarterback the OK after putting him through a series of tests, a league source told the Bee. According to the newspaper, doctors were waiting to clear Kaepernick until he got back some of the weight and strength he lost while recovering from the surgeries.

Kaepernick was a regular attendee of the 49ers' offseason workouts and said at the team's three-day mandatory minicamp in June that his only focus was on getting healthy and reclaiming the starting job after a tumultuous offseason that also included a trade demand, followed by a proposed trade with the Denver Broncos that fell apart.

That has put Gabbert miles ahead of Kaepernick in terms of learning new coach Chip Kelly's system, although Kaepernick tried to stay up to speed by going through the physical motions of his dropbacks and reads while standing behind the rest of the offense.

Kaepernick said in June that he expects an open competition when the 49ers open training camp.

"They haven't said anything about pecking order or anything like that," he said. "All I've heard is Chip has told me it's going to be a competition ... and to come in and be ready to compete. That's going to be my mindset, and I'm excited to do that.

"I'm ready to give this team everything I have. It was a great feeling to be out there this week. The fan support that I've gotten through everything and especially seeing people out, the support that I've gotten was amazing. It's made me really excited to be out here and play."
Related topics:
sportsespnpracticesan francisco 49ersnflclearcolin kaepernick
Copyright © 2022 ESPN Internet Ventures. All rights reserved.
TOP STORIES
Witness: Trump grabbed steering wheel, wanting to go to Capitol | LIVE
Durham launches program to help people with mental health issues
Why you should pay down your credit cards right now
ACC changing scheduling model for football in '23 and beyond
2 Raleigh women shot while on business in California
Teen charged in shooting that injured Goldsboro 3-year-old
Daily Harvest responds after customers sickened, hospitalized
Show More
ABC11 to present Raleigh's July 4th fireworks show at Dix Park
Wake County man wins more than $200K in NC Lottery
Alligator found, captured in Brunswick County pool
Sheetz announces limited-time discount on gas ahead of July 4 holiday
Boy Scouts jump into action after Missouri Amtrak train derailment
More TOP STORIES News