Reseeding the 2019 NCAA tournament field for the Elite Eight 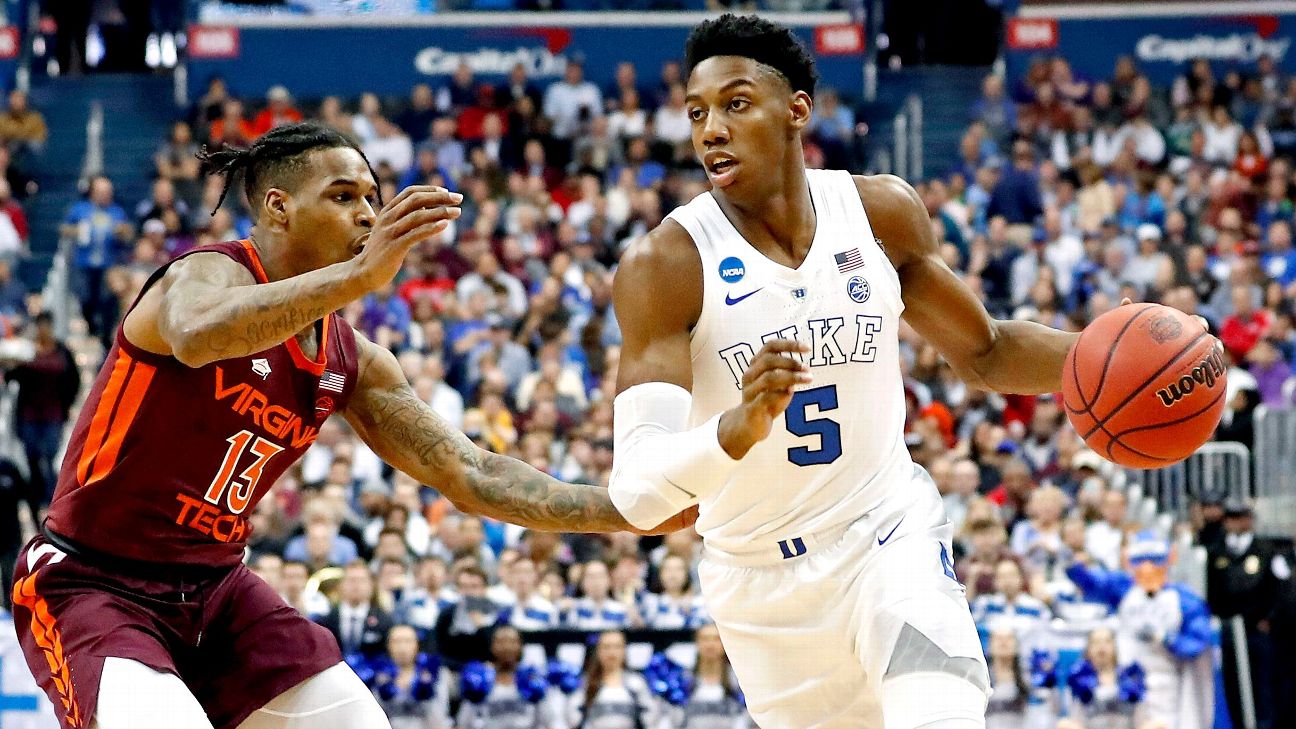 ESPN
By Myron Medcalf
Thus far, we've reseeded the field after the first round and heading into the Sweet 16. And since those pieces ignited such an emotional response -- the multitude of synonyms for "idiot" that Kentucky fans used to express their disappointment was impressive -- we decided to keep going. A look at the Elite Eight field entering Saturday's contests:

Twenty years ago, UConn made its first run to the national title, a rally that culminated with a victory over a great Duke team. The Huskies won their final three matchups in that season's NCAA tournament by 14 points combined. Perhaps this Duke squad will evoke its one-time nemesis, continue to win nail-biters, and cut down the nets in Minneapolis.

Aubrey Dawkins saw a putback roll in and out of the rim in the final moments against Duke last weekend. On Friday, Virginia Tech's Ahmed Hill missed an alley-oop that would have sent the game into overtime. The Blue Devils aren't perfect. But they won Friday's game without Cam Reddish, who reportedly suffered a knee injury before tipoff. They finished 6-for-20 from the 3-point line, and 1-for-13 if you subtract the efforts of Tre Jones (22 points, 5-for-7 from beyond the arc). It doesn't matter how the game is going -- ugly, close, blowout, thriller, physical, whatever -- Zion Williamson and Duke continue to win. In spite of the close shaves, the Blue Devils remain the team to beat in our eyes.

This season, Mark Few's team is the nation's top offensive collective. The Bulldogs have maintained their reputation as a dominant scoring team by averaging 117 points per 100 possessions in their first three NCAA tournament games. But Florida State, which boasted the ACC's top interior defense this season, forced the Bulldogs into difficult shots (42 percent inside the arc). But that's why this Gonzaga squad is even more intimidating than the group that reached the title game two years ago with the best defense in the country.

These Bulldogs have morphed into this elite defensive team that's playing at Texas Tech levels (0.85 PPP allowed in three games) right now. We know they can put up big numbers. But Rui Hachimura, Killian Tillie and Brandon Clarke have anchored a defensive effort that has led this program to its third Elite Eight in five seasons.

Michigan has played basketball for 110 years. Since its first NCAA tournament appearance in 1948 -- 71 years ago -- no team had ever contained the Wolverines the way Texas Tech, the nation's best defense, did in Anaheim, California, on Thursday night. Michigan's 44-point tally in a loss to the Red Raiders in the Sweet 16 was a record low for the program. This is the same Texas Tech squad that held a Buffalo team that was averaging 84.5 points to just 58 in the second round. This program's commitment to defense is unrivaled in college basketball.

Plus, Chris Beard has a squad that also has made 55 percent of its shots inside the arc. And Jarrett Culver, a potential top-five pick, has entered make-that-money mode. He's averaging 24.8 points over the past five games.

When Nick Ward fell to the floor, holding the same hand he'd injured late in the regular season, during Michigan State's 80-63 victory over LSU in the Sweet 16, two things happened: Spartans fans screamed, "Not again!" and Cassius Winston once again made the case that he's the best player in America not named Zion Williamson. He finished Friday with 17 points and eight assists. His five turnovers weren't ideal. But he just continues to lead this injury-plagued group through challenging moments. First to a Big Ten title and now to the Elite Eight.

He's not doing it solo. Michigan State has made more than 40 percent of its 3-pointers in back-to-back games. And other players (see: Aaron Henry scoring 20 points Friday) continue to step up. The Spartans have also held their NCAA tournament opponents to only 92 points per 100 possessions. This is, somehow, one of the most dangerous teams in the field.

"It feels good. I don't feel any pain right now." That's how PJ Washington described his foot after his team's 62-58 win over Houston in the Sweet 16 on Friday. That's bad news for the field. After missing the first and second rounds because of a foot injury, Washington made a clutch free throw late and then blocked a Corey Davis Jr. drive down the stretch. He finished with 16 points (shooting 6-for-8 from the field).

Against the Cougars, the same Tyler Herro (19 points) who struggled against Wofford in the second round played like a first-round pick and hit a big 3-pointer late. With Washington back and healthy, Kentucky can win a national title. The Wildcats just have a different level of confidence with their best player on the floor. And now John Calipari is in the Elite Eight for the seventh time in 10 seasons.

Bruce Pearl's postgame tears told the story. We won't see Chuma Okeke in the Elite Eight. And that's sad. The 6-foot-8, 230-pound sophomore who finished with 20 points (3-for-5 from the 3-point line), 11 rebounds, 2 steals and a block (zero fouls, too) before suffering a torn left ACL in Friday's 97-80 upset of top seed North Carolina had been the most important two-way player on the roster in the NCAA tournament.

Entering the Sweet 16, Auburn averaged an additional 7 points per 100 possessions when Okeke was on the floor, per HoopLens.com. To the Tigers' credit, this resilient bunch extended its lead over UNC in the final 8 minutes, 8 seconds without Okeke. And the Jared Harper-Bryce Brown combo is still one of the most potent duos in the country, helping an Auburn squad that has made nearly 40 percent of its 3-point attempts and forced 16 turnovers per game in three NCAA tournament matchups. But the Tigers would be higher on this list if Okeke could go Sunday.

After losing one of America's most talented senior classes, Purdue regrouped around Wooden Award candidate Carsen Edwards and won a slice of the Big Ten regular-season championship. But a couple of losses to Minnesota in a 10-day span, coupled with Edwards' struggles of late, generated some doubt about this program's viability in the NCAA tournament. Forget all of that now.

In the opening round, Purdue outplayed an Old Dominion squad ranked in the top 30 in defensive efficiency. Edwards dropped 42 points and established a school record with nine 3-pointers in Purdue's 26-point victory over Villanova, which suffered the worst NCAA tournament defeat in the program's history that night. But Purdue's 99-point effort (130 points per 100 possessions) against Tennessee, which owned the SEC's No. 2 defense, on Thursday underlined this team's offensive excellence. The Boilermakers are more than Edwards. Ryan Cline finished 7-for-10 from the 3-point line against the Vols. Matt Haarms finished in double digits in the win over Old Dominion. Purdue is one of the best offensive teams in the Elite Eight.

The Cavaliers will enter their Elite Eight matchup against Purdue on Saturday with an opportunity to completely erase the memory of last season's first-round loss to UMBC. Their path to this juncture has featured a series of shaky moments in the NCAA tournament, though. They were down by double digits in the first half against Gardner-Webb in the opening round. Kyle Guy finished 2-for-15 in a victory over Oklahoma in the second round. Guy and De'Andre Hunter finished a combined 3-for-15 from the 3-point line in a four-point win over Oregon on Thursday. We just haven't witnessed a complete or excellent game from Virginia in the NCAA tournament.

And, in part, that's a testament to the Cavaliers' resilience. The nation's most balanced program (second in offensive efficiency, third in defensive efficiency, per ESPN Analytics) is difficult to beat even on subpar days. Yet, can Tony Bennett's team advance past Purdue with another so-so effort? That seems unlikely. 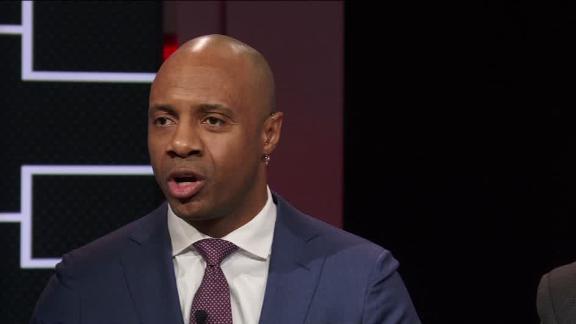