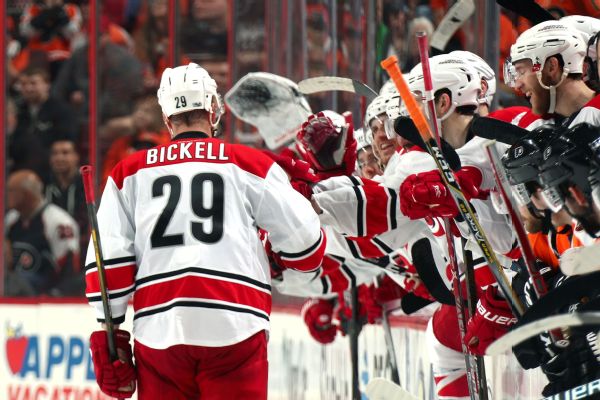 PHILADELPHIA -- Bryan Bickell scored in the shootout of his final game before retiring because of multiple sclerosis, and the Carolina Hurricanes beat the Flyers 4-3 on Sunday in the season finale for both teams.

During a stoppage in the first period, fans and players from both teams gave Bickell a standing ovation and stick tap. The 31-year-old three-time Stanley Cup champion was diagnosed with MS in November but returned to hockey in February.

His shootout goal was the first of his career in his second attempt and set up Brock McGinn's winner on the final shot of Carolina's season. McGinn also scored twice in regulation.

"It was definitely special, nice getting the win, nice to score," Bickell told Fox Sports Carolinas after the game. "I had one shootout attempt before and it didn't go very well, so I was happy to get that one and finish up on a good note.

"I told a couple of the guys that the first time I touched the Stanley Cup [with theBlackhawksin 2010] was here in Philly, so to end it here in this fashion was pretty special."

It was an emotional night for Bickell, who had his wife and daughter watching from the stands.

"I think I sweated all the tears out, so I don't have much left," Bickell said after receiving countless handshakes and hugs from teammates. "It's been an emotional week leading into this day. Seeing my family here, all the people that supported me through it all, I'm just happy."

He added that "seeing the Philly fans show that kind of respect by giving me applause, that was nice."

Bickell, 31, had been sidelined since his November diagnosis, but returned in February when he was assigned to the Hurricanes' AHL affiliate in Charlotte. He was called up to play the last four games of the season with Carolina.

On Saturday, Bickell took part in a walk to benefit MS research and his teammates surprised him by joining in and wearing T-shirts that said "BickellBrave."

During Saturday's home finale, he received a pair of ovations from the crowd, including one when he was announced as the winner of the team's Steve ChiassonAward for determination and dedication to the game. That award is determined by a vote of the players.